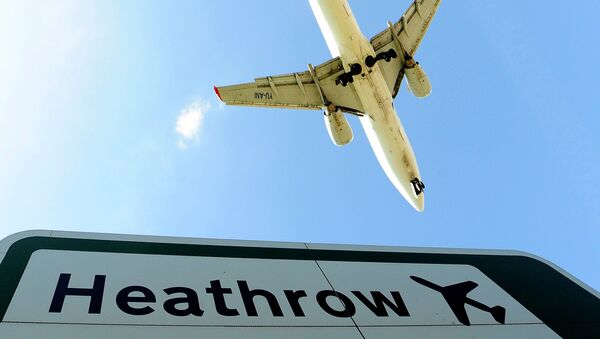 © REUTERS / Toby Melville/File Photo
Subscribe
British holidaymakers in Portugal are waiting anxiously to hear whether the country will be added to the UK’s list of countries regarded as “unacceptably high risk” because of an increase in coronavirus cases. Looking at this story in more detail, Sputnik spoke to the Analyst Mandy Boylett, in this interview.

Sputnik: Following a lack of dialogue and a constant change of mind… is the government being responsible in informing and protecting British holidaymakers?

Mandy Boylett: I think what's happening is an absolute farce. They're playing roulette with people's holidays and it's very, very unfair. I think what they need to bring in is airport testing. If you test everybody at the airport, and if it's positive then they isolate, if it's negative you make them quarantine for five days, if no symptoms then they can get on with their lives.

I think, if we just did that for everywhere until there's a vaccine, or until we have improved the situation so that people aren't at risk, then I think that's got to be the way forward. You can't be saying you can go to Portugal and then taking it off and it's also very difficult for businesses as well.

It's difficult for airports. It's difficult for travel companies to plan. The last thing we want is for any more businesses to go bust, but if they can plan, if they know, 'well, we're going to do a COVID test when people come back and then if they're okay after five days', then that's fine or whatever is deemed to be safe, then I think people would be quite happy to pay for a COVID test themselves as well if they could avoid 14 days of quarantine.

There has to be a better way than this cut-off. Scientifically, it doesn't make that much sense either because if the incidence rate goes up to 20 per hundred thousand, then you have to quarantine. There are places in the UK where the incidence of COVID is more than 20 per 100,000.

So, I could maybe go to Bolton and then come back to Yarm in Teesside and I wouldn't have to quarantine. I think what they're doing is not scientifically valid and I think it's terrible for both people's holidays that they've been looking forward to that they're paying for and also for the travel businesses that have to plan their flights and everything to do with that. I think it's absolutely appalling what the government is doing now and there's no justification for it.

Sputnik: Is the government right to impose a blanket ban on Portugal and are blanket bans the right approach? Should holidaymakers really be targeted in this kind of way?

Mandy Boylett: You have to make sure that everybody's safe. We heard recently of that flight back from the Greek island where there were a number of people infected on the flight so that there do need to be precautions but they have to be the right precautions.

I don't think the government is deliberately targeting the holiday holidaymakers, I just think that's completely inept, and that's the problem. It's U-turn after U-turn, the blind leading the blind, they don't seem to have a proper strategy.

They say they're being led by the science but clearly, they're not and they need to do more testing. They need to test when people get back, they need to get this test where they can turn it around in 20 minutes, which I believe exists. They need to roll that out and test at the airport and that I think is the answer.

Sputnik: What do we desperately need to see from government e.g. clarity, new policies, leadership?

Mandy Boylett: It's very, very unsettling for businesses. It's difficult to know what the right strategies are. I mean, personally, if I'd been in charge, I wouldn't have opened the pubs; I think if you look at where the cases are coming from its mainly pubs, it's restaurants and its meatpacking and food processing factories where they air is recirculated.

COVID-19 Live Updates: France to Impose Reciprocal Quarantine Rules on Travellers From UK
I was on a train coming back from London on Sunday and a bunch of drunk people got on at York. They didn't socially distance. They weren't wearing masks. They were shouting at the tops of their voices putting aerosols into the air. I was travelling with Grand Central I tweeted them nothing happened.

I put in a formal complaint and they just said: 'Oh well, we know this happens at York. It's up to LNER to police the station'. I was absolutely outraged because I've been shielding because my son's not well and I felt that I was put into danger because of basically nobody is enforcing anything.

So, I think if we've got rules, like social distancing on trains and 100-pound fines for not wearing masks, getting force getting forcing them that's the one thing I would say. The point I'm making is that when people are drunk, you can't enforce anything, so just don't have the pubs open.

Have the schools open, they're necessary, but I think if you if you close the pubs, you'd get a lot less transmissions especially amongst younger people who feel invincible.