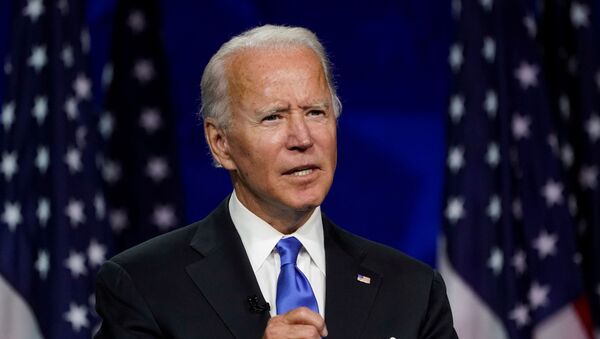 © REUTERS / KEVIN LAMARQUE
Subscribe
International
India
Africa
Numerous protests that erupted across the US after George Floyd's death have resulted in violence against police and civilians, and acts of looting and vandalism. As the unrest has got out of control in many cities, questions have arisen about how the handling of the protests could affect Democrats and Republicans' chances in the November election.

Dr Zalmay Gulzad, professor at Harold Washington College in Chicago, in the Political Science Department has shared his views on the matter.

Sputnik: Why does Trump's Wisconsin visit matter so much for the president?

Zalmay Gulzad: It was very important for him to go [there] because [Kenosha] Wisconsin is very close to Chicago's suburbs, maybe 25 minutes from Chicago, and that's the fourth biggest city in Wisconsin.
So the instability there that is happening, the Black Lives Matter, they were supported by the Democratic Party and they were – we should call them lumpenproletariat – their excuse is that they are supporting the Black Lives Matter, but in reality, looting and destroying the property: the federal property and the private property.
So, as a result, it was important for the President of the United States (POTUS) to send the National Guard to secure the city and the situation's under control now. So that was the result, even though the Mayor of Kenosha and the Governor of Wisconsin warned President Trump not to come. But that was his responsibility to go and see the situation. And also people demanded, wanted to see the President coming and looking at the situation from [up] close.

Sputnik: What consequences might the visit have for the president's upcoming re-election campaign?

Zalmay Gulzad: Well, that will help. See, the problem is that for Trump there are two things. If he doesn't crush this movement, this violent situation, then everybody will make him [look] that he is not an effective president. If he does do that, then they will say he is a dictator. So the problem is that he has to control it, otherwise the society will go in chaos.

So if you look at these two people that we are talking about. One is Floyd in Minnesota, the one who was choked by the police and killed, the first one, which caused this entire problem, he was an unemployed person, he has a record of non-resume. And he was killed because he was using fake money to buy cigarettes and the person, the shopkeeper, called the police. And he resisted the arrest, that's why he was shot and he was killed.

The second one that has happened in Kenosha, this man also had a criminal record. He had five children, no job, and he went to his former girlfriend's home and beat her, and then she called the police. And the police went to arrest him and he resisted the arrest and he was trying to use his knife against the police. And then he was shot.

So, the Democratic Party is making these people heroes, but they are not heroes, they are criminals. And I am not justifying the police using too much force, but the idea is that the chaos coming from this group of unemployed people, which I call them lumpenproletariat, they are just using the Black Lives Matter to loot and destroy.

I live in Chicago. If you look at Chicago, most of the schools are gone, they are looted. And now they are using the National Guard to protect the citizens and the property of the people.

Sputnik: But do you think the president has succeeded in drawing in voters that want "law and order"?

Zalmay Gulzad: Absolutely. You see, the city group is most probably divided – some are Democrats and some Republicans – but in the countryside we are talking about farmers, Wisconsin is a very farmer state, there's a lot of farmers. And most farmers are supporting the Republican Party because they want security; they want to sell their products in the city. So that helps a lot for Donald Trump.

Sputnik: Biden's advisers are discussing a possible visit as soon as this week, according to sources. How would you evaluate Joe Biden's chances to secure a victory in the state of Wisconsin?

Zalmay Gulzad: Well, Joe Biden is using this Black Lives Matter chaos for his own profit. His only goal is to get the Black Vote. That's about it. And the Democratic Party is creating this situation, they want to get the Black vote at any cost. So they are supporting that group of people. The African-Americans are 12 per cent of the population. And that makes a huge difference in the voting. So the Democratic Party is using that for the benefit of voting in November.

And I am sure he [Biden] will go there and he will meet the family and all these things, but the reality that we have to look at is that "crime is a crime". The police have to, and it doesn't matter what country one lives, but if you are using fake money or you are abusing your woman, naturally, you are going to be in trouble. So they are not talking about that, they are saying that they are heroes and they were killed by the police. That is a problem and people are not accepting that. Looting is a major problem because a lot of people have lost their buildings, their property. So that is a big issue right now.