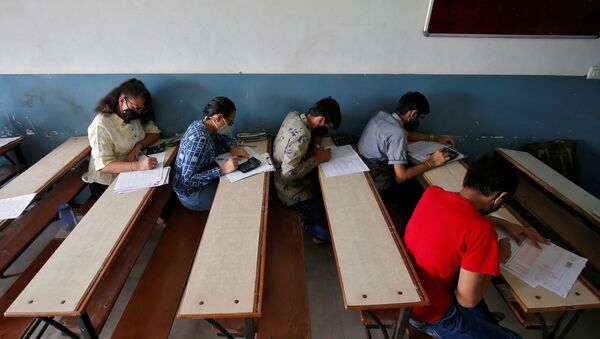 Pratibha Sharma
Sputnik correspondent
All materialsWrite to the author
With no option to hold street protests amid the pandemic, seekers of specific government jobs have been leading an online tirade against the delay in conducting examinations and announcing the results. For these non-technical and lower category jobs, the majority of the students hail from rural parts of the country.

Both the farmer's son in Uttar Pradesh aspiring for a stable and secure job, and the woman from a metropolitan city who wants to change position, say that the "slow-paced" process of conducting and announcing the results of government job recruitment examinations has deprived them of the fruit of their hard work.

The row is over the delayed results of the Combined Graduate Level (CGL) of the Staff Selection Commission (SSC-CGL) exam and the Railway Recruitment Board’s Non-Technical Popular Categories (RRB NTPC) recruitment test.

While SSC-CGL exam's tier 3 results have been pending since December 2019, millions of students filled the forms for 34,000 job vacancies for the RRB NTPC exams in March 2019, admit cards to which haven't been issued yet.

Responding to the delay in issuing admit cards, Railway Ministry spokesperson D.J. Narain tells Sputnik that the things are being worked out (issuing admit cards), and assured that all the vacancies advertised will be filled in.

"25 million people had registered for the 34,000 vacancies, i.e. 2 percent of the country's population. You look at the volume...and then COVID-19 happened. When the country is shut down, how can you expect us to conduct the examination? We are working on it and the details would be rolled out soon," Narain said.

The Staff Selection Commission, too, has issued a new notification stating the results will be out by 4 October.

The tedious process of recruitment has taken both a financial and a mental toll on the students.

Vinita Singh (26), who started her preparation in 2017 and appeared for CGL 2018 tells Sputnik that she may want this job for passion, but many others are doing it to lift their families out of poverty.

"The situation has taken a toll on my mental health. I have been waiting for the results since December 2019. While the world is moving ahead, I am standing still since 2017. And the saddest part is this is not what I deserve. I have given everything for this job."

Similarly, Abhishekh Raghav who has filled the form for NTPC Railway exams says the delay has caused financial strain in the family.

"While my whole family runs on my fathers' pension $476 (INR 35,000). I have been working in a private firm to support the family. But I am aware how my parents struggled to pay for my coaching fee," said another aspirant .

Government jobs in India are sought after because of the stability and security they provide. Students spend significant time and resources to pass these exams, which are the second most popular after the coveted Union Public Service Commission (UPSC), which offer jobs in federal government departments.

Along with the demand to speed up the process, students have also been calling up for structural reforms in the system of conducting these exams and the setting up of a grievance procedure.

#SSCdeclareCGLresult and  #SpeakUpForSSCRailwaysStudents has been trending on Twitter for the past few days with over 3 million tweets. Students have been tagging Indian Prime Minister to speak up on the issue and give jobs to the aspirants.