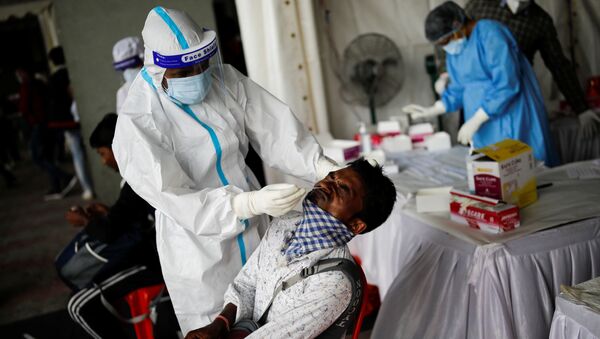 Pratibha Sharma
Sputnik correspondent
All materialsWrite to the author
India appears to be gradually inching towards becoming the new epicentre of the coronavirus outbreak, especially in the wake of the phased lifting of the lockdown in the country. Experts predict India will soon overtake the US and Brazil in terms of caseload.

On a day when India recorded the world's highest single day spike of 83,883 COVID-19 cases, the Indian Health Ministry revealed that five states comprised 62 percent of the total cases.

Indian has now recorded more than 80,000 cases on three occasions. Thursday was the record spike.

However, the fatality rate in Karnataka and Delhi has now increased, the secretary pointed out.

New Delhi, which witnessed a significant decline in cases over the past few days, is also experiencing its highest single day spike of over 2,000 cases in a day after touching a low of 600 cases per day.

Reacting to the situation, Bhushan said the government is engaging with the Delhi government over the rise in the number of active cases and deaths in the national capital.

Delhi Health Minister Satyendra Jain, however, has denied that the spike is a second wave of coronavirus disease in the state.

Meanwhile, the federal ministry has said that the second round of the countrywide sero-survey in 70 districts is underway and the results would be announced within two weeks. The first sero-survey showed that less than 1 percent of the country's population had been affected.