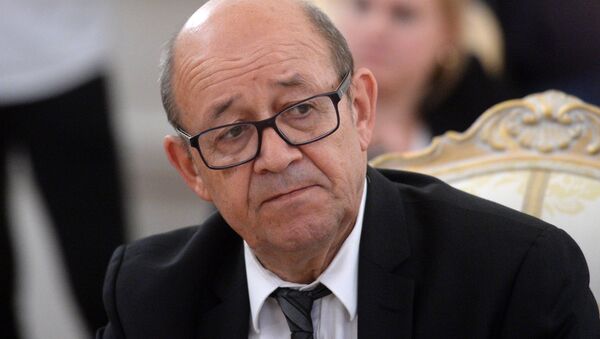 © Sputnik / Kirill Kallinikov
/
Go to the photo bank
Subscribe
MOSCOW (Sputnik) - French Foreign Minister Jean-Yves Le Drian has denounced the alleged use of a nerve agent from the Novichok group to poison Russian opposition figure Alexei Navalny, and called for Russia to investigate the matter, given the status of Navalny in Russian politics.

"I was appalled to learn of the information issued by the German authorities confirming the use in Russia of a nerve agent belonging to the 'Novichok' family to poison Alexei Navalny. I wish to condemn in the strongest possible terms the shocking and irresponsible use of such an agent," Le Drian said in a statement released late on Wednesday.

He also urged the Russian authorities to find out under what circumstances the nerve agent had allegedly been used on Navalny, which he branded as a violation of the principle of the prohibition of the use of any chemical weapon. Le Drian also said the matter raises questions due to Navalny's political status in Russia.

Russian Foreign Ministry spokeswoman Maria Zakharova on Wednesday noted that the German government's claims of Navalny's poisoning lacked evidence, and added that it was perplexing why Berlin first addressed the EU, NATO and third parties, such as the Organization for the Prohibition of Chemical Weapons (OPCW), in relation to the case, instead of contacting Russia directly.

Berlin on Wednesday claimed a German military laboratory had undeniable proof of 44-year-old Russian opposition figure Navalny's intoxication with the nerve agent. Kremlin spokesman Dmitry Peskov told reporters later in the day that Russian doctors had not found any traces of poison in Navalny's samples during his treatment in the Russian city of Omsk.

Navalny fell gravely ill during a flight from the city of Tomsk to Moscow on 20 August. He was immediately hospitalized after the plane had made an emergency landing in the Siberian city of Omsk. Later, Navalny was transported to the Charite clinic in Germany for further treatment.