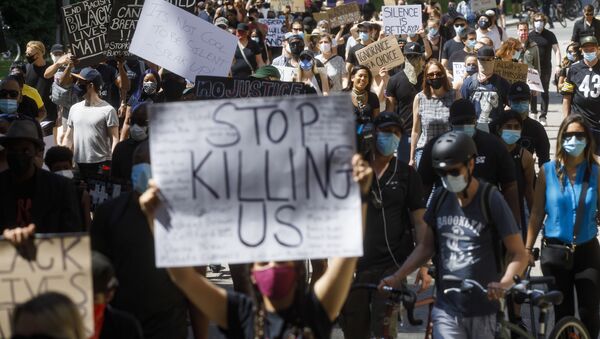 TORONTO (Sputnik) – The current societal unrest in Canada, the United States, and other parts of the world is proof that current systems in place are failing citizens, Communist Party of Canada leader Liz Rowley said in an interview.

Amid the ongoing unrest, politicians, activists, and other public figures have often asserted that communists and other left-wing groups are at fault.

Rowley says that while communists and other left-wing factions are part of the movement for change, to characterize the protests as a left-wing conspiracy is to ignore all the issues that ordinary citizens are currently facing.

“I can tell you that there are a lot of communists and other progressive people who are at those protests and demonstrations in the US, in Canada, and for that matter, around the world”, Rowley said. “What we're actually seeing is an uprising of people who are outraged by police violence and by systemic racism against the black community, indigenous peoples in the first place, but also all racialized people.”

Rowley added that what the world is witnessing is a “very broad movement” that is far too complex to attribute to one group or another but that boils down to one simple fact: the current systems in place are failing ordinary Canadians and contributing to rapidly growing inequality.

The leader of Canada’s Communist Party says that the ongoing coronavirus-induced economic downturn exemplifies the pitfalls of current Canadian governance.

“It's pretty obvious that capitalism is not working for many, many people. The current economic crisis underlines that”, Rowley says.

As the Canadian economy slowly emerges from a two-month shutdown this spring, according to the state statistics agency, employment numbers remain well below pre-pandemic levels, with many more having had their working hours reduced. Rowley says that most of these individuals are not eligible for unemployment insurance, as it currently stands, and questions how they will get by going forward.

“Seventy-five percent of [people currently receiving COVID-19 benefits] are not eligible for unemployment insurance. And so how are they going to live? Capitalism caused this crisis that all of us are facing now through corporate greed and governments that pandered to these big corporations – most often the mouthpiece of these big corporations – that people are thinking, ‘maybe socialism is the way to go’”, Rowley said.

When asked if socialism can exist in a democratic society – most socialist states tend to be regarded as authoritarian by Western experts – Rowley says the current Canadian political system is not as democratic as advertised, adding that it is a myth that socialism is anti-democratic.

“The argument that people who oppose socialism use is that Marxism, in particular, is anti-democratic. I can say, that couldn't be further from the truth”, Rowley says. “I think Cuba, Vietnam, and other socialist-moving countries - their governments are very democratic. They are governments that represent the people and they generally have very broad public support.”

She adds that Canadians and other Westerners simply do not have an accurate understanding of socialist societies because of pervasive disinformation efforts by domestic media.

Rowley also dismisses the notion that a transition to socialism has to have violence, like other communist and socialist revolutions in the past. She, however, warns that the civility of any transition is predicated on the will of ruling elites.

Earlier this year, communists around the world marked the 172-year anniversary since the Manifesto of the Communist Party by Karl Marx and Frederick Engels was first published in February of 1848. Rowley says the principles outlined over 170 years ago are just as relevant today.

“I think the exposé of capitalism that Marx, [Vladimir] Lenin and Engels initially described is proving to be true”, Rowley says, adding that Lenin’s books on imperialism and his critique that private appropriation of the proceeds of social production results in imperialism, colonialism, and racism accurately reflects the state of affairs today.

Furthermore, Rowley says that technological advances, including increased automatization and artificial intelligence, has only accentuated the rate of exploitation of the proceeds of production by capitalist ownership.

Rowley says that the Communist Party’s platform is largely based on the principle of investing in Canadian workers and harnessing the changing societal attitudes, especially among young Canadians, to grow the party.

The platform includes provisions for a transition to a green economy, higher standardized wages and pensions, free post-secondary education, and a plan to build one million new affordable housing units in the next five years to address the country’s housing crisis, a major sticking point amongst young Canadians.

Rowley says her party’s ideas have many allies and sympathizers, not only in Canada’s progressive movement but among mainstream party members; the problem she says is Canadian political heavyweights including Prime Minister Justin Trudeau and even New Democrat Party leader Jagmeet Singh are unwilling to work with her or other left-wing parties and groups.

“One of the questions is how can we harness the atom and move the struggle for socialism forward in Canada so that we're not continuously stuck with: ‘will it be the Liberals who [form] the government in the next election or will it be the Tories [Conservatives]”, Rowley says.