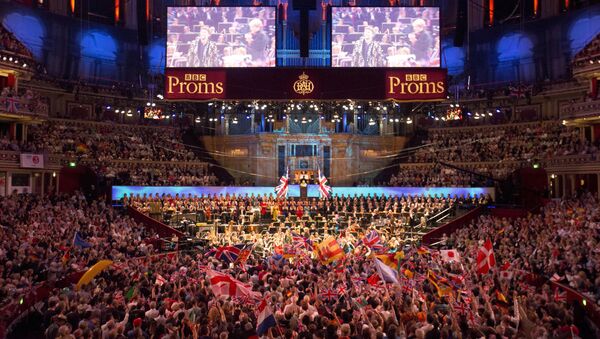 © REUTERS / Neil Hall
Subscribe
Svetlana Ekimenko
All materialsWrite to the author
Opinions have been split in the ongoing debate about the British patriotic songs Rule, Britannia! and Land of Hope and Glory after the BBC considered scrapping the lyrics during their performance at Last Night of the Proms, opting for an orchestral version, amid a heightened agenda of political correctness.

UK Prime Minister Boris Johnson has waded into the ongoing row over the BBC considering stripping the lyrics of the British patriotic songs Rule Britannia and Land Of Hope And Glory during their Last Night of the Proms performance due to their perceived association with slavery and colonialism, reported the BBC.

Johnson’s statement echoes his sentiments on the matter voiced last week, when he urged for an end to “cringing national embarrassment about our history”.

Musicians, the media and political figures have been weighing into the debate over the pieces.

On 2 September, one day after Tim Davie took over from Tony Hall as the 17th Director-General of the BBC, the corporation announced that both songs would be sung at the Last Night of the Proms after all.
The popular favourites shall now be performed by a select group of vocalists.

Davie was cited as saying the BBC needs reform “with urgency”, underscoring it must be “a universal public service”.

Reacting to the news that the two tunes would be sung, as normal, at the Last Night of the Proms, Culture Secretary Oliver Dowden tweeted that it was only “common sense”.

Pleased to see common sense has prevailed on the BBC Proms

​The two songs have been in the limelight amid the current heightened attention to issues of political correctness in society, fueled by Black Lives Matter protests and anti-colonial sentiment.

The scandal over whether Rule Britannia and Land of Hope and Glory should be scrapped from the setlist of the Last Night of The Proms erupted after the centuries-old tunes were derided as 'racist propaganda’ in a debate on ITV's Good Morning Britain.

Reports started to circulate suggesting the BBC was considering dropping the songs from the concert slated for 12 September at the Royal Albert Hall in Kensington, West London, over their apparent links to colonialism and slavery.

The move was seen as fueled by awareness of the issues in the wake of the Black Lives Matter protests following the death of black former convict George Floyd at the hands of US police.

Amid the CIVID-19 pandemic and social distancing protocols, musicians are performing live at the Royal Albert Hall, but without an audience.

The BBC’s former director-general Lord Tony Hall had previously insisted that the move to scrap the lyrics to the songs was a “creative” one, as there would not be a “whole audience to sing along”.

“It’s quite hard creatively and artistically to make that work. I think they’ve come to the right conclusion,” added Lord Hall.

Hall did acknowledge, however, that the issue of dropping the songs because of their association with Britain’s imperial past had been discussed by the BBC.

000000
Popular comments
Many Britons still believe that England did not wrong to colonize other lands. Every other country was doing it, so what. They feel very proud of it. This pattern is called brainwashing. Think why thousands of Russian (women, children) went to Syria on fake hopes, fed by the muslin propaganda. The same you could say about the crusaders. Who controls the media control the world.

landauroj
3 September 2020, 12:49 GMT4
000000
landauroj, could you explain to me, as I do not know, the story of thousands of Russian women and children who 'went to Syria on fake hopes' etc. When was that event? I am very interested. Thank you.
armor
3 September 2020, 15:24 GMT4
000000
Newsfeed
0
New firstOld first
loader
LIVE
Заголовок открываемого материала
Access to the chat has been blocked for violating the rules . You will be able to participate again through:∞. If you do not agree with the blocking, please use the feedback form
The discussion is closed. You can participate in the discussion within 24 hours after the publication of the article.
To participate in the discussion
log in or register
loader
Chats
Заголовок открываемого материала
Worldwide
InternationalEnglishEnglishMundoEspañolSpanish
Europe
DeutschlandDeutschGermanFranceFrançaisFrenchΕλλάδαΕλληνικάGreekItaliaItalianoItalianČeská republikaČeštinaCzechPolskaPolskiPolishСрбиjаСрпскиSerbianLatvijaLatviešuLatvianLietuvaLietuviųLithuanianMoldovaMoldoveneascăMoldavianБеларусьБеларускiBelarusian
Transcaucasia
ԱրմենիաՀայերենArmenianАҧсныАҧсышәалаAbkhazХуссар ИрыстонИронауОssetianსაქართველოქართულიGeorgianAzərbaycanАzərbaycancaAzerbaijani
Middle East
Sputnik عربيArabicArabicTürkiyeTürkçeTurkishSputnik ایرانPersianPersianSputnik افغانستانDariDari
Central Asia
ҚазақстанҚазақ тіліKazakhКыргызстанКыргызчаKyrgyzOʻzbekistonЎзбекчаUzbekТоҷикистонТоҷикӣTajik
East & Southeast Asia
Việt NamTiếng ViệtVietnamese日本日本語Japanese俄罗斯卫星通讯社中文（简体）Chinese (simplified)俄罗斯卫星通讯社中文（繁体）Chinese (traditional)
South America
BrasilPortuguêsPortuguese
NewsfeedBreaking
14:30 GMTVideo: Police Act Against Climate Protesters Blocking M25 Motorway
14:15 GMTRonaldo Will Cause as Many Problems as He Solves for Solskjaer, Ex-Liverpool Player Carragher Says
14:03 GMTXi Urges SCO to 'Resist' External Meddling After US, Australia Vow to Bolster Ties With Taiwan
14:02 GMTUN Security Council Holds Meeting on Afghanistan
13:39 GMTHitting US Debt Ceiling Could Trigger Recession, White House Says
13:32 GMTUnited Airlines Briefly Grounded Flights in US, Canada Due to Computer Issues, FAA Says
13:29 GMTDutch Acting Defense Minister Resigns Over Kabul Evacuations Chaos, Reports Suggest
13:27 GMTFrance Says It Cannot Trust Australia in Trade Talks After Canberra Ditched Joint Sub Deal
13:20 GMTPiers Morgan Says His New Job Will Be 'Stuff of Nightmares' for Meghan Markle
13:18 GMTIndonesia Wary of Australia's Plans to Acquire Nuclear Submarines
13:14 GMTUS Slaps New Hezbollah-Related Sanctions on Several Individuals
12:57 GMTPakistan Will Get ‘Badly Burnt’ If It Courts the Taliban Beyond a Point, Warns Author
12:51 GMTUS General Mark Milley Reportedly Downplayed George Floyd Protests' Severity in Talks With Trump
12:51 GMTIs Narendra Modi Emerging as the Most Sports Loving Indian Prime Minister?
12:28 GMTFAA Bans Drone Flights Over Texas Bridge After Thousands of Haitians Filmed Flocking to Area
12:27 GMT'Show Got It Wrong': Priyanka Chopra Apologises After Taking Flak Over 'The Activist' Format
12:05 GMTNicki Minaj Tweet That COVID-19 Vaccines Cause Impotence Sparks Protest Outside CDC HQs - Video
12:01 GMTPelosi Asked After Capitol Riot If WH Staff Did Anything But 'Kiss' Trump's 'Fat Butt', Book Claims
11:48 GMTArmenian Police to Block Streets Near Central Square Due to Planned Rallies
11:32 GMTUK Military 'Actively Recruiting' New Spies for Deployment in Asian Region Amid AUKUS-Caused Waves