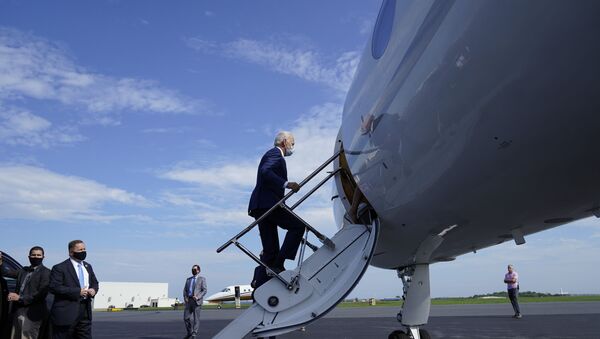 Chris Summers
All materialsWrite to the author
Donald Trump shocked Hillary Clinton’s campaign office in 2016 by winning Wisconsin, a traditional Democrat stronghold which had last gone Republican way back in 1984 when Ronald Reagan was President.

Joe Biden is visiting Kenosha, Wisconsin on Thursday, 3 September, and is due to meet the father of Jacob Blake, who has been paralysed after being shot seven times in the back by a white police officer last month.

Will Democrat Governor Tony Evers – or anyone in the media – ask Joe Biden to stay away like they did with President Trump, who actually had a reason to be in Kenosha earlier this week? Or was the one sided response simply partisan politics?

​The Democratic nominee’s visit comes 48 hours after President Donald Trump visited the city, which is on the shores of Lake Michigan in the south-east corner of Wisconsin.

Wisconsin - which is known as The Badger State, because of the nickname given to Cornish migrants who mined for lead there in the 1820s - is also set to become a crucial swing state in this year’s presidential election.

"How is it that Joe Biden can fly to Wisconsin tomorrow, but he was unable to fly to Wisconsin just two weeks ago to accept the nomination of the Democratic Party?...What in the in the manner of science has changed?"

On the eve of his visit to Wisconsin, Joe Biden said: "This is about making sure that we move forward" and he stressed he would not be going to Kenosha to "tell them what to do."

The violence and disorder in Kenosha and in cities like Portland, Oregon, has put Biden in a difficult position.

He is not keen to condemn Black Lives Matter campaigners, who are considered to be mostly natural Democrat voters, but if he does not support the police he is in danger of losing voters in the centre ground who have been unimpressed by Trump especially during the coronavirus crisis. 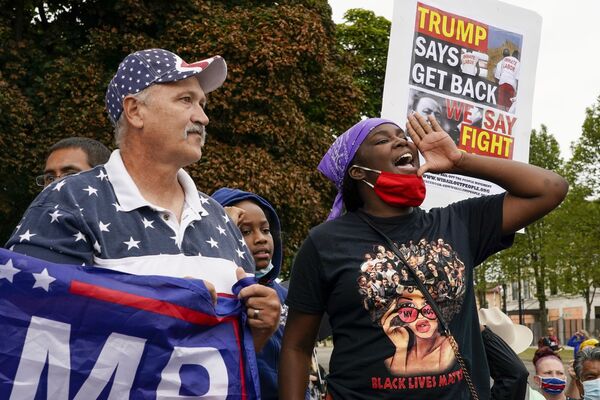 So why has Wisconsin become so important this year?

A poll by Marquette University carried out last month - before the Jacob Blake shooting - put Biden five points ahead of Trump in Wisconsin.

The Badger State had voted for the Democrats in every single presidential election between 1988 and 2012 and was considered such a “blue state” that Hillary Clinton did not bother to campaign there in 2016.

That year Trump got 47.9 percent of the popular vote in Wisconsin, compared to Hillary Clinton’s 46.9 percent, with the Libertarian candidate Gary Johnson winning 3.58 percent.

​The Democrats may have considered it safe in 2016 but between 1932 and 1988 Wisconsin was something of a swing state. 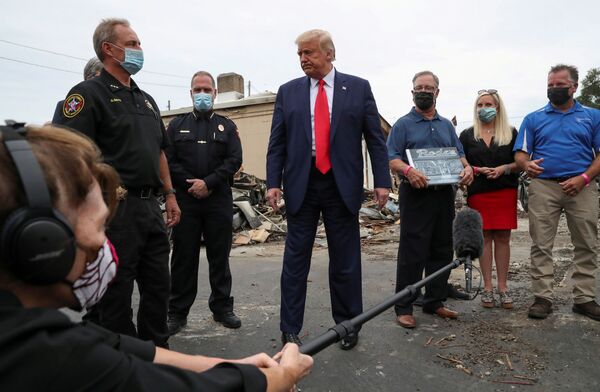 FILE PHOTO: U.S. President Donald Trump talks to reporters as he stands with Kenosha police and business people while examining property damage to a business while visiting the city in the aftermath of recent protests against police brutality and racial injustice and ensuing violence after the shooting of Jacob Blake by a police officer in Kenosha, Wisconsin, U.S., September 1, 2020
© REUTERS / LEAH MILLIS

His successor Harry Truman won Wisconsin in 1948 but the Republican, Dwight D. Eisenhower carried the state in 1952 and 1956.

The Democrat, John F. Kennedy, was unable to win it in 1960 but was still elected President.

"So the dirty little secret is: he doesn't want us to unite. He wants to keep us divided in order to help him win... in Wisconsin, we rise above this." pic.twitter.com/WVjZbHDzxN

​After his assassination, victory in Wisconsin helped Lyndon B. Johnson to win the 1964 election.

Four years later it swung back to the Republicans when Ronald Reagan was elected President and it stayed red in 1984.

This time round its 10 electoral college votes will be all to play for.

“Thousands of voters in Wisconsin signed petitions to put us on the ballot and we are suing to protect their right to have choices beyond the two parties funded by the millionaires and billionaires. " - Howie Hawkins

​Last month the Wisconsin Elections Commission recommended West and his running mate Michelle Tidball be kept off the ballot in the state because they missed deadline to submit 2,000 signatures from voters.

The Democrats claim the Republicans are covertly pushing West's candidacy in a bid to take away crucial votes from the Democrats in a handful of swing states, such as Wisconsin.

Around 35 percent of those polled in Wisconsin said they planned to send mail-in votes, rather than in person, which meant President Trump’s recent attempts to reduce funding for the US Postal Service could have been crucial if they had not been reversed by Congress.