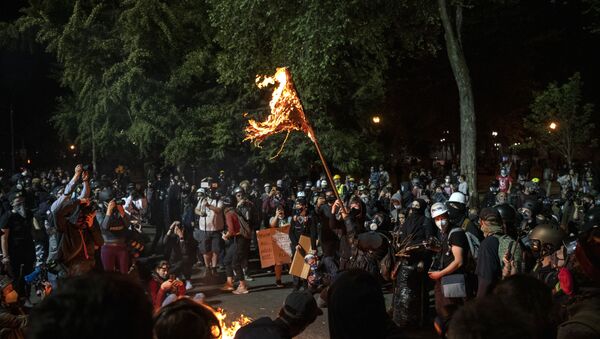 Democrats are walking a tightrope between peaceful protesters and rioters, as they risk alienating either progressive voters or moderates ahead of the elections, note American academics, suggesting that tensions are likely to continue simmering for quite a while whoever wins the presidency in November.

On 30 August, Democratic presidential nominee Joe Biden condemned rioting and slammed his Republican contender and incumbent president, Donald Trump, for what he called his encouragement of violence.

"As a country, we must condemn the incitement of hate and resentment that led to this deadly clash", Biden said in a statement. "It is not a peaceful protest when you go out spoiling for a fight. What does President Trump think will happen when he continues to insist on fanning the flames of hate and division in our society and using the politics of fear to whip up his supporters?"

Democrats on Horns of Dilemma

The protests and violence has become a very difficult issue for Joe Biden and the Democratic Party, admits Mark Jones, a political science professor at Rice University’s Baker Institute for Public Policy.

"On the one hand, they recognise the legitimacy of the protesters grievances and support the call for racial justice and police reform", he says. "On the other hand however, they realise that the images of violence, vandalism, crime and general disorder and anarchy alienate a large proportion of regular Democratic voters whose support they will need in November if they are to defeat President Trump and take control of the US Senate".

Therefore the Democratic Party and its nominee are trying "to thread a needle by supporting the protesters by also condemning violence and vandalism", according to the professor.

The political scientist says that while Democrats cannot condemn the protesters as they risk alienating the progressives ahead of the election, Donald Trump "using a law and order campaign message is one of the best options they have as we move toward November".

Earlier, US mainstream media drew attention to concerns among top Democrats that the upsurge in violence may upend Biden's election odds and boost Trump's chances of winning the 2020 vote.

Whoever emerges victorious in November will have to deal with the protests, says Anthony Robert Pahnke, professor of international relations at San Francisco State University.

"If Biden becomes President in November, he will have lots of work to do to address the demands of protestors", Pahnke notes. "If the Democrats win the Senate and keep the House, then it is possible for major legislation to be passed that would address police reform, which is something that racial justice advocates have been promoting".

Police reform in itself won't automatically calm the tensions down as law enforcement is decentralised in the US and "much of policing is controlled at the local level", regardless of who is president, he remarks.

"For this reason, tensions will continue into the future administration no matter who is president", the academic acknowledges.

According to Fox News, the Biden campaign has kicked off a "major swing-state ad blitz" concerning rioting and blaming Trump for the ongoing violence. However, Trump supporters reject Biden's argument and argue that while the Democratic nominee condemns rioters when it suits him to do so, the president has made the law and order message a leitmotif of his campaign.

"Sorry, Joe Biden, but you can't claim to oppose riots and crime when your campaign is literally on the record bailing violent rioters out of jail!" tweeted Donald Trump Jr., attaching a link to a Reuters article which described how Biden staff donated to the Minnesota Freedom Fund (MFF) that "pays bail in riot-torn Minneapolis".

To add to the controversy, FOX9 in Minneapolis revealed on 8 August that the MFF bailed out not only demonstrators but also alleged violent offenders. Biden's running mate Kamala Harris was also spotted urging her supporters to donate to the MFF on Twitter in June.

​Biden's Sunday statement came on the heels of the killing of a man identified as Aaron “Jay” Danielson, a member of conservative group Patriot Prayer, amid clashes between Trump supporters and left-wing protesters late Saturday, in Portland. According to video footage that emerged in social media immediately after the deadly incident, the supposed victim was shot while he was walking down the street.

No altercation, no fight. He walked up behind him and assassinated him because of his political views.pic.twitter.com/jNDs0YJcGn

​The Oregonian reported that police are investigating Michael Forest Reinoehl who earlier called himself "100% Antifa" on social media in connection with the death. The Portland Police has not confirmed the report.

Last week a white 17-year old teen, Kyle Rittenhouse, shot and killed two protesters and wounded another with an AR-15-style rifle in what his attorney describes as self-defence amid riots in Kenosha, Wisconsin, over the police shooting of black man Jacob Blake.