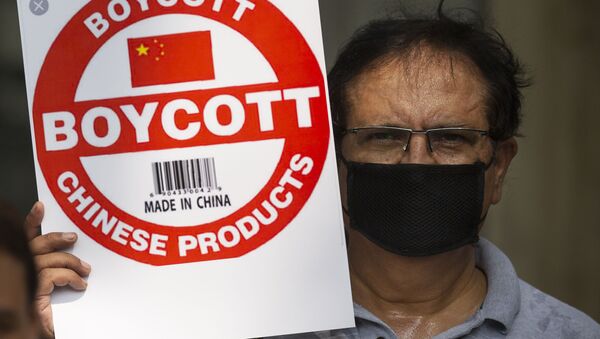 Radhika Parashar
All materialsWrite to the author
India and China entered the fifth month of the border conflict with fresh physical altercations reported between the troops near India’s Chushul Valley overnight on 29-30 August. Citing security related concerns, India has imposed several restrictions and tariffs on imports from China in the last several months.

Continuing its “digital strike” against mobile applications of Chinese origin, the Indian government banned 118 more apps, including PUBG, from operating in the country, citing national security reasons, on Wednesday. This fourth round of India’s app-ban move has placed the total tally of blocked Chinese apps in the country to 233.

​The newly-banned apps include an array of gaming apps, such as Rangers of Oblivion, Crusaders of Light and the very popular multi-player online game PlayersUnknown Battleground (PUBG) that has over 175 million installations from India alone, accounting for 24 percent of its total installations worldwide.

Indian Govt Banned #PUBGMOBILE
and 118 other Chinese apps.
List of 118 mobile Apps from China banned by Govt of India over and above the 59 Apps banned earlier. pic.twitter.com/mANb272bgk

​The Ministry of Information Technology said that the decision has been taken against the backdrop of complaints received from various sources about the misuse of some mobile apps, which have allegedly stolen and surreptitiously transmitted users’ data in an unauthorised manner to servers which are located outside India.

“The compilation of this data, its mining and profiling by elements hostile to the national security and defence of India, which ultimately impinges upon the sovereignty and integrity of India, is a matter of very deep and immediate concern which requires emergency measures,” a statement issued by the ministry reads.

Addressing the fresh ban, Achen Jhaker, a senior cyber security and tech analyst from India, told Sputnik that this step by the Indian government is only “logical”.

Ban or No Ban: Here's Why Indians Don't Need Chinese Apps
“The Indian Government has taken a very logical step, banning 118 Chinese Mobile applications. For a very long time, China has been using these apps as a front for stealing critical data from users not just in India but globally. This data can be used for any of their nefarious intentions. The [Indian] government has realised that China will not stop their malicious spy activity so they have no choice but to ban these apps,” said Jhaker.

India is the world’s second largest market in terms of both internet usage as well as its smartphone market, with over 333 million and 500 million users respectively.

Border tensions first escalated in Galwan Valley, in India’s Himalayan terrain,  on 27 April, when the country claimed that Chinese personnel had entered the Indian side of Line of Actual Control (LAC).

A total of 20 Indian soldiers were killed in brutal hand-to-hand combat on 15 June, as Indian and Chinese troops accused each other of encroaching upon the territory along the loosely demarcated 4,057-km Line of Actual Control that divides the two countries.