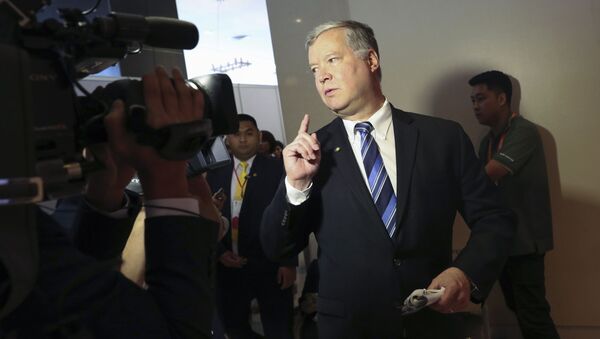 Rishikesh Kumar
All materialsWrite to the author
Amid the pertinent clashes between troops of India and China in the Ladakh sector, New Delhi and Washington have increased level of interactions at military and diplomatic level. The two countries will be holding their first virtual 2+2 format dialogue between foreign and defence ministries later this month, Sputnik has learnt.

Making a strong pitch to build a formidable force with including nations like Japan, US, India and Australia (the so-called 'quad') in the Indo-Pacific region, US Deputy Secretary of State Stephen Biegun has asserted that Washington's strategy is to push back against China in every domain.

"We're doing it in the security area. We're doing it in terms of outsised demands to claim sovereign territory, whether it's in the Galwan Valley of India on the India-Chinese border, or in the South Pacific," Stephen Biegun said during the third India-US Leadership Summit.

Beigun also indicated that the US wants to transform this quad partnership into a regional version of NATO as he believes that the Indo-Pacific region is actually lacking in strong multilateral structures.

“The original NATO North Atlantic alliance only had 12 members relative to its 27 today. So you can start a little bit smaller and grow into your membership,” the American diplomat said while underlining that it will only happen if the other countries are as committed as the United States.

The statement was made on the day when the troops of India and China engaged in another physical fight in the Chushul region of Ladakh. The Indian defence ministry claimed that the People’s Liberation Army were trying to challenge the status quo in the region.

In June of this year, US Secretary of State Mike Pompeo had said that the Chinese threat to India and Southeast Asia is one of the reasons the United States is reducing its troop presence in Europe.

However, India remains more susceptible, given the military structure of the quad; as former Indian Navy chief Sunil Lanba had said, “India is the only country in the Quad with a land border with China. In case of conflict…nobody will come and hold your hand.”

Nevertheless, the US administration has been pressuring India to enhance the level of co-operation in military terms among the members, as these rule based-orders would “at least moderate the tendencies of the Chinese government to make it a better partner for many around the world”.