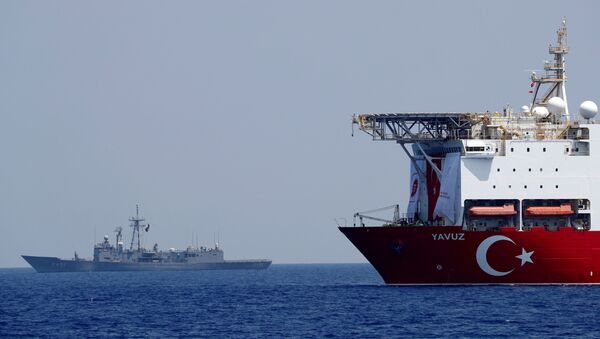 "Provided Greece is ready for dialogue, we are ready to negotiate, advocating for a just allocation of resources," Cavusoglu said at a press conference in Ankara.

At the same time, the minister condemned allegedly unilateral steps by Athens to isolate Ankara in the region, as well as the deployment of Greek troops to the Kastellorizo island, which Turkey claims to be a demilitarized zone under the Paris Peace Treaties of 1947.

"Only police officers and gendarmes may be on the Meis [Kastellorizo] island. If the Greek side tries to exceed the allowed arms limitations, it will end up losing," the minister warned.

The Turkish-Greek tensions in the Eastern Mediterranean escalated after Ankara began exploration drilling in the Greek-claimed waters in early August. Athens considers this territory to be its exclusive economic zone and has mobilized its armed forces to high alert, vowing to protect its sovereign rights by all means necessary.

Last week, Greek soldiers were reported to be disembarking from a ferry on the island.