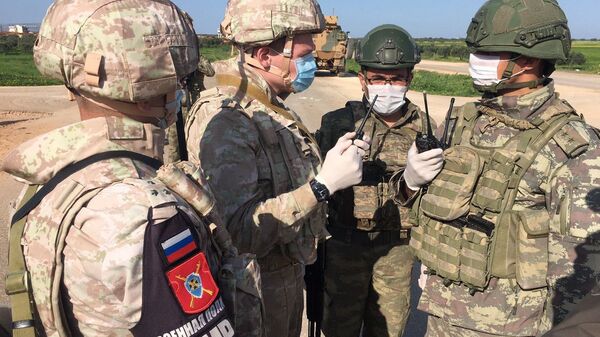 MOSCOW (Sputnik) - The Russian military police and the Turkish armed forces have conducted their second joint training in the Syrian province of Idlib, the deputy head of the Russian Defence Ministry's Centre for Syrian Reconciliation, Rear Admiral Alexander Grinkevich, said on Tuesday.

"In the interests of ensuring the security of the joint Russian-Turkish patrol of the M4 highway in the Idlib de-escalation zone, ... the second joint training of the Russian military police units and the Turkish armed forces took place in the region of Trumba, Idlib province", Grinkevich said during the briefing.

The rear admiral noted that the coordination of reconnaissance and combat drone activities, including during the target engagement, were practiced during the training.

Grinkevich added that Syrian militants from the Jabhat al-Nusra* terror group shelled three villages in the provinces of Latakia and Aleppo.

"Three attacks by the Jabhat al-Nusra terrorist organization were recorded in Basratoun and Arbikh in Aleppo province and in Beit Smaira in Latakia province", he said.

The admiral told reporters that Russian military police continued patrolling the province of Aleppo. No attacks by Turkish-backed armed groups were recorded in the past day.