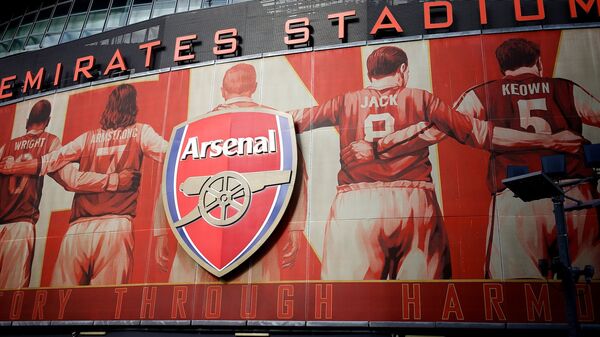 MOSCOW (Sputnik) - English football club Arsenal makes Ken Friar OBE life president following his decision to step down from his role as executive director after 70 years of working at the London sporting institution.

‘Mr. Friar,’ as he is known in the club, began working in Arsenal’s box office in 1950, as a 16-year-old boy, Arsenal said in a farewell message on its website.

“Every day of my working life has been at this great club and I have treasured them all. It has been an honour and a privilege to see the club grow whilst maintaining its core traditions and values,” Friar was quoted as saying.

Friar eventually came to manage the box office department before becoming a club secretary in 1973. He was appointed managing director in 1983, a position which he held until 2000 when he took charge of the new stadium project. The Emirates Stadium in north London was delivered in 2004, in time and on budget, the website wrote.

Also in the year 2000, Friar was awarded the Order of the British Empire (OBE), the UK’s highest honour, for services to association football.

Friar, 86, said he took the decision to step down before the onset of the pandemic believing that the club was in good hands of the owners, US sports tycoons Stan and Josh Kroenke, the board of directors and staff. Friar also said he looked forward to enjoying football games purely as a supporter without the stresses of managing and board responsibilities.

Arsenal is one of the oldest English football clubs, founded in 1886 on the weekend sporting traditions of the munitions workers of the Royal Arsenal. The club has made invaluable contributions to writing the rulebooks and philosophy of the modern game. It currently has the distinction of being the only club to have never been relegated from the top flight and to have completed an entire season without a single defeat.