Why the US is Doomed 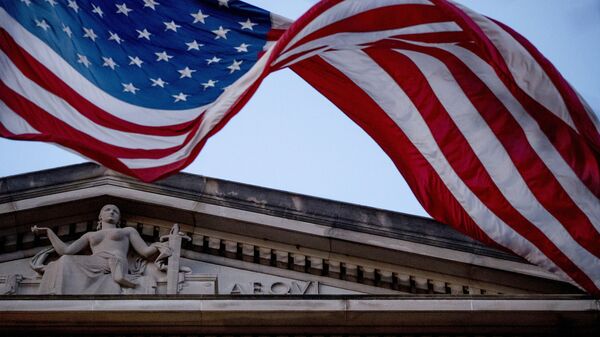 Finian Cunningham
All materials
The fatal trouble with the US is that it has a chronic political disease. But none of the political class, including “populist” President Donald Trump, have a diagnosis to offer. And any remedial action always requires accurate diagnosis.

What we have instead are all sorts of quack, or at best inaccurate, assessments, which never lead to remedial action, but rather to a compounding of problems because the problems are left unaddressed and neglected and ultimately allowed to fester.

The basic problem is that the United States has devolved into a hyper militarized oligarchic state. The vast, growing social inequality in the nation, and its grotesque waste of economic resources on militarism are but two manifestations of this state. That is the outcome of decades of US corporate capitalism. All Western states tend to share similar deformities, but the American version of the disease is at its most virulent and moribund.

The next problem is that there is no informed public debate, awareness or political leadership to diagnose the disease and how to cure it.

We just witnessed the two ruling political parties hold their national conventions to nominate presidential candidates. For the emocrats and Joe Biden, the “problem” is all about getting rid of incumbent White House occupant Donald Trump.

For the Republicans and Trump, the “problem” is all about defeating “far left radicals” and “socialists” as allegedly represented by Biden and the Democrats.

The Republican rallying call is particularly ludicrous. To equate Democrats and career politicians like Joe Biden as “socialist” is an audacious and bewildering falsehood.

The truth is both parties are but two faces of the same coin. That coin is the oligarchic system of American capitalism and its reliance on the monstrous military industrial complex.

Sneakily, the Democratic leadership tries to misdirect public misgivings about the Trump presidency by making the forthcoming November election a referendum on personality. But the Democratic party establishment will never permit a more accurate critique of America’s problems because the party is after all an instrument of the system, just as the Republicans are. The notion of “right” and left” or “conservative” and “liberal” is a misconception.

The Democrats endeavor to blame it all on Trump in order to distract from the core problem which is the system itself. Perhaps some Democrats are privately aware of a more accurate analysis. But for whatever reason – political cowardice, media censorship – they don’t speak out.

Some may say Bernie Sanders and his ilk come close to a proper analysis of all that’s wrong. But then why do they endorse Joe Biden who is a long-time friend of the oligarchic system and its record of countless overseas wars?

Lamentably, the way things stand, the US is heading for much greater political division and social chaos. The majority of ordinary Americans are being turned against each other because they are being misled and misdirected by false narratives.

Instead of being united by a common suffering and exploitation by the oligarchic system, American citizens are being driven into futile factionalism by fake political “representatives”.

Trump’s supporters see a patriotic duty to defend the nation from “Marxists” and “anarchists”. Throw into the conspiratorial delirium stacks of assault rifles and no wonder people are beginning to shoot each other dead.

What the US needs is a genuine political third party, one that transcends the status quo of “two-party stitch-up” for the oligarchy.
One that offers Americans an accurate political analysis for why their country is imploding from inequality, police brutality, debt and endless imperialist wars.

What the US needs is a mobilization of the population against the corrupt oligarchy of which Trump and Biden and their party cronies are creations. Until that happens, the US is doomed to descend into even more failure with frightening potential for civil war and fascism. All because the political disease of American corporate capitalism is allowed to persist.

000000
Popular comments
Presidential elections in the US are a joke. They are like boxing matches. The next election is a match between Trump and Biden. The contest excites the spectators (voters). Like in a boxing match, lots of money are flowing around. In this case the amount of money that goes around is astronomical, tens billions of dollars. The fans of the two boxers are having their own contests of words, of fists punching in the air, and even of exchanges of bullets, like in Portland. But in the end, the boxing match between Trump and Biden will be decided, not by the spectators (voters), but by the referee (the Military Industrial Complex and the big corporations). The spectators will go back home and will face the grim reality of the ever growing impoverishment.
Tolerance
31 August 2020, 21:00 GMT16
000000
Mr Cunningham it needs more than just one more party which, like the two faces of the Janus party already existent, will be utterly dependent upon $$$$ to have ANY chance of a hearing, a voice with the public. First, it needs the corruption to be completely eradicated: no more money in elections/politics. None. Zero. Then we need to introduce proportional representation - along with as many parties as reflect people's political perspectives and all with an equal chance to be heard, to be elected to state and federal office. IF Germany, with about a quarter of the USA's population can have 2-3 major parties, something like 6 minor ones and a gazillion mini parties, the first 8-9 represented in the Reichstag and possibly one or two of the mini ones as well, then surely to goodness this country not only can but should be similarly politically represented. Instead all we hear from the Blue face of the Janus party is that "we are divided" and that this "division" should, must, needs to be healed (i.e. forced into subservience, ignorable). Do those so-called well educated folks, the politicos etc., really believe that we all - really - hold the same political philosophies, views, positions? that all it needs is a little tinkering around with the message (i.e. spin) and the vast majority will come on board and cease being "divided"??? Really? 350 or so million folks? All with, at base, aside from a few weirdos out there, the same political worldviews???? Their contempt is all too bloody obvious; or they are in fact as thick as two short planks.
Nonentity
31 August 2020, 20:06 GMT8
000000
Newsfeed
0
New firstOld first
loader
LIVE
Заголовок открываемого материала
Access to the chat has been blocked for violating the rules . You will be able to participate again through:∞. If you do not agree with the blocking, please use the feedback form
The discussion is closed. You can participate in the discussion within 24 hours after the publication of the article.
To participate in the discussion
log in or register
loader
Chats
Заголовок открываемого материала
Worldwide
InternationalEnglishEnglishMundoEspañolSpanish
Europe
DeutschlandDeutschGermanFranceFrançaisFrenchΕλλάδαΕλληνικάGreekItaliaItalianoItalianČeská republikaČeštinaCzechPolskaPolskiPolishСрбиjаСрпскиSerbianLatvijaLatviešuLatvianLietuvaLietuviųLithuanianMoldovaMoldoveneascăMoldavianБеларусьБеларускiBelarusian
Transcaucasia
ԱրմենիաՀայերենArmenianАҧсныАҧсышәалаAbkhazХуссар ИрыстонИронауОssetianსაქართველოქართულიGeorgianAzərbaycanАzərbaycancaAzerbaijani
Middle East
Sputnik عربيArabicArabicTürkiyeTürkçeTurkishSputnik ایرانPersianPersianSputnik افغانستانDariDari
Central Asia
ҚазақстанҚазақ тіліKazakhКыргызстанКыргызчаKyrgyzOʻzbekistonЎзбекчаUzbekТоҷикистонТоҷикӣTajik
East & Southeast Asia
Việt NamTiếng ViệtVietnamese日本日本語Japanese俄罗斯卫星通讯社中文（简体）Chinese (simplified)俄罗斯卫星通讯社中文（繁体）Chinese (traditional)
South America
BrasilPortuguêsPortuguese
NewsfeedBreaking
19:37 GMTThe US Space Force’s Oldest Adversary, Social Media, Roasts Their New Uniforms
19:25 GMTTraffic on Motorway in German Bavaria Halted Due to Armed Hostage-Taking Situation - Reports
19:24 GMTJoe Biden, DHS Chief Upset by 'Horrible' Videos of Border Patrol Dealing With Haitian Migrants
19:24 GMTBiden Believes Footage From US-Mexico Border ‘Horrific’ and Supports Probe
19:15 GMTSoldiers Killed in Galwan Valley Clash With India Now Part of Patriotism Lessons for Kids in China
19:14 GMT‘An Unpredictable Ally’: Does the AUKUS Pact Undermine the Quad's Significance?
19:11 GMTSearch for Fiancé of Gabby Petito, Brian Laundrie, Resumes in Florida Wilderness
18:54 GMTFrench Defenсe Minister Says US Instigating Confrontation With China
18:48 GMTNew ‘Storytelling’ in Skripal, Litvinenko Cases Meant to 'Sabotage' Effort to End Russia-UK Cold War
18:40 GMTTexas Governor Says Biden Has Not Granted Federal Emergency Declaration Over Border Crisis
18:39 GMTWoman Claims US Billionaire Leon Black Raped Her in Jeffrey Epstein’s Townhouse, Media Says
18:29 GMTMigrants Escape After Overtaking Transport Bus
18:08 GMTVolcano Continues to Erupt on Spanish Island of La Palma
17:49 GMT'US Hegemonic System' Has 'Failed Miserably', Iran's Raisi Tells UN
17:24 GMTUSAF Reveals It Has Five New B-21 Strat Bombers in Production, Not Two as Originally Reported
17:07 GMTAncient Pyramid Made From Volcanic Ash Likely Built to 'Calm Earth’s Anger,' Media Says
17:00 GMTDozens Protest Outside UN Headquarters Against US Global Military Engagements
16:43 GMTUS House Democrats Introduce Legislation to Prevent Presidential Abuses
16:35 GMTPalestinians Ready to Renew Talks With Israel If They Show Readiness, Foreign Minister Says
16:31 GMTRussian Embassy in UK Slams Scotland Yard's Approach to Fact-Finding in Skripal Case