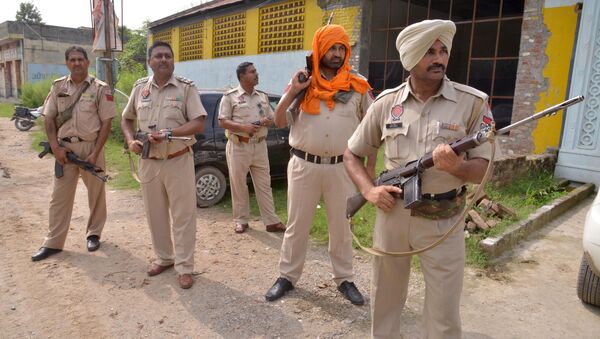 New Delhi (Sputnik): The Khalistan movement in the Indian state of Punjab is led by secessionists who demand a separate sovereign state, 'Khalistan', for the Sikh religious minority community in India's Punjab. Recently, the federal government also banned several sites related to these groups.

The two men were arrested by a special cell of the Delhi police for hoisting the Khalistan flag on a building in Punjab; they had planned to travel to Pakistan to receive terror training, the report quoted by Indian media HT has revealed.

The duo - Inderjeet Gill and Jaspal Singh - was set to receive help from Pakistan's Inter-Services Intelligence agency to travel from Delhi to Pakistan via Nepal.

"These two men were planning to go to Nepal from Delhi. From there, the ISI sleuths would have taken them to Pakistan for terror training." the police said.

The duo was wanted in a sedition case registered at a police station in the city of Moga, Punjab. They allegedly hoisted the Khalistani flag at the District Collector's office on the eve of Independence Day on 14 August.

The Khalistani movement, which demands an independent Sikh country in the northern Indian state Punjab, began in 1950s; it gained momentum in the 1970s. Recently, the federal government banned 40 websites linked to the pro-Khalistan group Sikhs for Justice (SJF), which is also banned in India.

Sikhs For Justice (SFJ), an unlawful organization under the UAPA,1967, launched a campaign for registering supporters for its cause. On recommendation of MHA, MeitY has issued orders under sec. 69 A of the I.T. Act, 2000, for blocking 40 websites of SFJ@AmitShah @HMOIndia