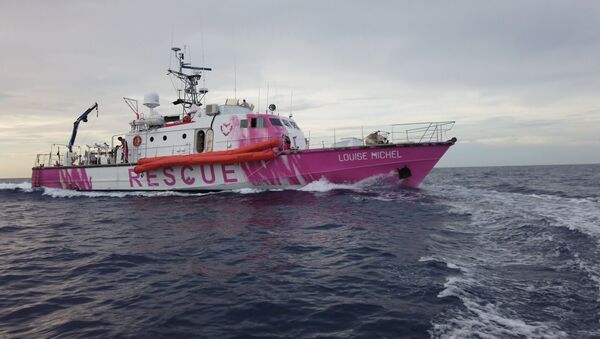 Oleg Burunov
All materialsWrite to the author
Earlier, on Saturday, rescuers were only able to evacuate 49 of the most vulnerable passengers, including 13 children, from the Louise Michel in the Mediterranean after the vessel requested assistance from the EU and Rome.

About 209 migrants on board the MV Louise Michel, sponsored by famous artist Banksy to rescue refugees in the Mediterranean Sea, have been taken to safety.

The vessel’s 10-strong crew tweeted late on Saturday that a fellow rescue boat, Sea-Watch 4, had evacuated “all remaining guests” of the Louise Michel, which earlier sent a mayday alert to the EU, as well as Italy and Malta, saying that the ship could not move due to its overcrowded deck.

#LouiseMichel just transferred all remaining guests onto #SeaWatch4, who now have about 350 people on board. It's not over: We demand a Place of Safety for all survivors, now. pic.twitter.com/KjUEG6yp4A

“It's not over: We demand a Place of Safety for all survivors, now”, the crew added in a Twitter message that came a day after they tweeted that the vessel is “unable to safely move and nobody is coming to our aid”.

“There is already one dead person on the boat. The others have fuel burns, they have been at sea for days and now they are being left alone in an #EU (!) Search and Rescue Zone. Don't let it become a body count. Do your job. Rescue them”, another tweet from the crew pointed out.

The rescue operation kicked off, earlier on Saturday, when Italian the Coastguard said in a statement that the Sea-Watch 4 vessel had taken aboard the 49 people from the Louise Michel who were “in the most fragile condition”, including 32 women, 13 children, and four men.

The evacuation came amid a migration crisis that Europe has been experiencing since 2015 due to the influx of thousands of migrants and refugees fleeing crises in their home countries in the Middle East and North Africa.

'The Migrant Crisis is a Reality That Europe Has to Face' - IPSE President
The asylum seekers are trying to reach EU states using various routes, primarily via Italy, Greece, Turkey, and the Balkans, with many of them dying in shipwrecks in the Mediterranean Sea.

Official data provided by the International Organisation for Migration (IOM) indicated that more than 19,500 migrants have crossed the Mediterranean from Africa to either Italy or Malta over the past eight months and that at least 550 migrants have died when trying to reach Europe.