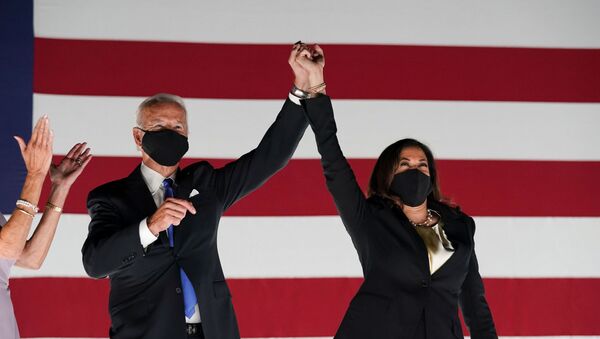 James Tweedie
All materialsWrite to the author
Joe Biden's deputy campaign manager, Kate Bedingfield, told Fox News that the Democratic candidate would unite the country and provide leadership she claims Trump has failed to show over COVID-19 and the Black Lives Matter movement. Biden has announced a speaking tour of four swing states after previously suggesting that he would hold no rallies.

Joe Biden's campaign has accused US President Donald Trump of inciting violence and failing to unite and lead the country during the COVID-19 pandemic and Black Lives Matter protests.

Speaking to Fox News Sunday's Chris Wallace Bedingfield contrasted the Democratic candidate's rhetoric with that of Trump, who she accuses of "trying to incite violence this entire summer."

"You saw Donald Trump go to New Hampshire on Friday and say, you know, ‘protesters my ass’," Bedingfield said. "He’s had every opportunity to speak as a leader to this nation that is hurting. To speak to people who are struggling, who are trying to rightly seek justice in this moment, but also who are looking around and who are afraid, who see chaos, who see unsettled times."

She also claimed that Biden's limited campaign speaking tour of four swing states would be about "calling together people, uniting the country, leading, encouraging people to take on this moment with a sense of purpose."

At the New Hampshire rally, Trump condemned protesters who surrounded Kentucky Senator Rand Paul outside the Republican National Convention in the capital this week. In other incidents, attendees were said to have been verbally abused and physically assaulted.

"They walked out to a bunch of thugs," Trump said. "Unhinged, manic rage. You ought to see last night in Washington, it was a disgrace. The agitators will go from rioting in the streets to running the halls of government," he stated, adding: "No one will be safe in Biden’s America."

Pressed by Wallace on her accusation of incitement, Bedingfield pointed out: "Absolutely, absolutely he has. He has encouraged his supporters to go out, to be aggressive."

Months of BLM protests in Portland, Oregon, have sporadically turned violent, but the city government has opposed the presence of federal law enforcement officers sent to guard federal buildings.

In Portland on Saturday night, a man was killed in circumstances that remain unclear, as attendees rallying in support of Trump clashed with a Black Lives Matter demonstration nearby. An investigation has been launched.

A new wave of BLM protests erupted over the May 25 killing of George Floyd by Minneapolis police officer Derek Chauvin, as well as more recent incidents of documented police brutality.

The latest outbreak of rioting this weekend broke out in Kenosha, Wisconsin, after a white police officer shot a Black man, Jacob Blake, seven times in the back after a call to an incident at a home in the city. Blake, facing sexual assault charges, was left paralysed from the waist down.