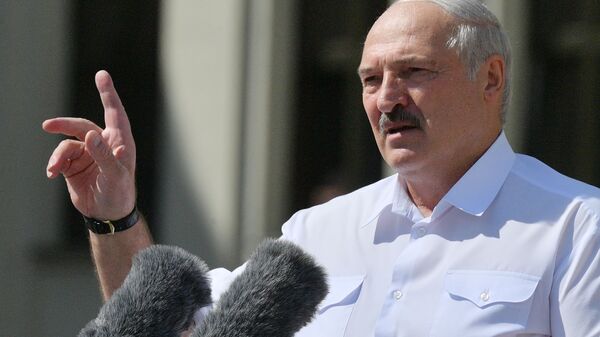 Irina Acheeva
correspondent
All materialsWrite to the author
Protesters have taken to the streets of Minsk for another day of protests, marching towards the residence of Belarusian President Alexander Lukashenko in Minsk.

The Belarusian president’s Press Secretary Natalya Eismont, when asked about the whereabouts of Alexander Lukashenko and whether he was following the situation in Minsk, shared a photo of him with an assault rifle in front of the Palace of Independence.

According to the Pul 1 Telegram channel, the photo was taken at about 13:00 GMT, when the crowd was outside the residence.

However, media reports have emerged suggesting the photo circulating on social media platforms could have been taken days before the Sunday protests.

The statement comes after armoured personnel carriers approached a police cordon outside the residence of Lukashenko in Minsk amid the ongoing anti-government protest.

At about 14:00 GMT, demonstrators were reported to be standing in front of the police fence clapping, shouting, and chanting slogans. Security forces have not reacted to the actions.

Almost 30 People Detained in Belarus During Saturday Demonstrations
By 13:00 GMT on Sunday, Belarusian security forces had detained 125 people during the ongoing unrest, a spokeswoman for the Interior Ministry said.

Belarus has been swept by opposition protests following the presidential election on 9 August that saw incumbent Alexander Lukashenko re-elected for a sixth term. While electoral authorities maintain that Lukashenko collected over 80 percent of the vote, the opposition insists that his key contender, Svetlana Tikhanovskaya, won the election. Opposition figures also accuse the security forces of resorting to excessive violence during the protests.

Thousands of protesters have been detained and hundreds have been hurt in clashes with the security forces, including over 150 officers, prompting the government to order personnel to stand down.