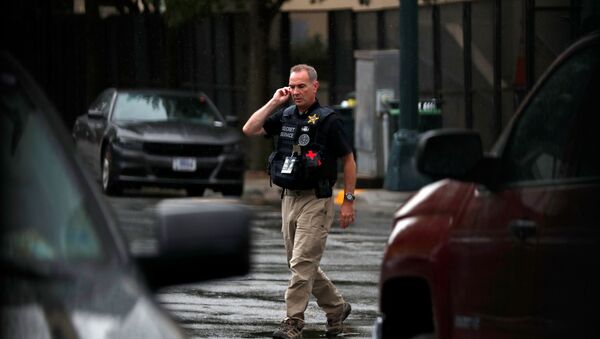 © REUTERS / CHRIS KEANE
Subscribe
International
India
Africa
Daria Bedenko
All materialsWrite to the author
Amid the ongoing coronavirus pandemic, US President Donald Trump, who marked his 2016 election campaign with large-scale rallies, has reduced the number of events. He delivered a speech on the Republican National Convention and has held smaller events.

"Dozens" of US Secret Service agents working around President Donald Trump or Vice President Mike Pence have contracted the coronavirus, with some withdrawing from service, The Washington Post reported, connecting it with Trump's insistence on travelling and holding campaign-style events.

According to the report, an unknown number of USSS agents "have been sickened or sidelined" over the past two months due to being in direct contact with infected people.

The Secret Service, while not providing exact numbers of agents who have tested positive for COVID-19, told The WaPo that the agency “continues to methodically assess the unique requirements necessary to operate in the ongoing pandemic environment.”

“The agency takes all appropriate precautions to protect our workforce, our protectees, and the public from exposure to COVID-19,” said Catherine Milhoan, an agency spokeswoman. “Precautions include, but are not limited to, maintaining appropriate social distancing, the provision and use of PPE, routine testing when appropriate, whether before, during, or after official travel.”

Commenting on the allegations, the White House told The WaPo that the president “takes the health and safety of everyone traveling in support of himself and all White House operations very seriously, as well as those dedicated to covering him and this administration".

“When preparing for and carrying out any travel, White House Operations collaborates with the physician to the president and the White House Military Office, to ensure plans incorporate current CDC guidance and best practices for limiting COVID-19 exposure to the greatest extent possible,” according to White House spokesman Judd Deere.

The USSS reports came after Trump delivered a speech accepting his party's nomination to a crowd of about 1,500 at the end of the Republican National Convention. The majority of those attending the event were seen without the masks recommended by health experts as a means of protection from infection.

During his speech, Trump praised the way he and his administration have tackled the COVID-19 pandemic, asserting that the United States - currently with the highest number of infections and deaths in the world - "has among the lowest case fatality rates of any major country anywhere in the world" while suggesting that the high number of registered infections is due to widespread testing.