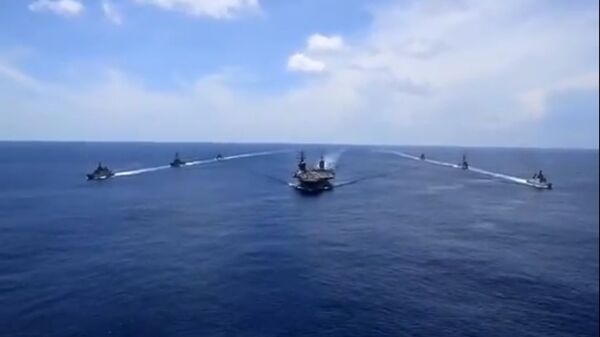 Military tensions are growing between the US and China as Washington continues to pursue a policy of attempting to dominate global affairs, Mike Wong, the vice president of the San Francisco chapter of Veterans for Peace, told Radio Sputnik’s Loud & Clear Friday.

“There’s been a steady upbeat in US naval exercises in both the South China Sea and the Taiwan Strait,” Wong told host Brian Becker on Friday.

“We sent two carrier battle groups together running through the South China Sea. That started it off. Now, we’re doing other ships. We sent a missile cruiser by just yesterday and, of course, the Chinese navy can’t ignore these provocations, because even though the US is claiming that it’s ‘freedom of navigation’ [FONOP], it’s not freedom of navigation when you send two carrier battle groups through the South China Sea - that is intimidation. That is setting up military exercises you would do if you were going to make war on China or if you were going to blockade the South China Sea, [from] where 60% of China’s oil comes and thousands of dollars’ worth of trade.”

According to a US Navy news release, the guided-missile destroyer USS Mustin “conducted a freedom of navigation operation in the South China Sea” on August 27. During such an exercise, the vessel steams through China’s claimed territorial waters as if they were international waters, because the US refuses to recognize the validity of China’s claims to control that area. In early July, the US sent two carriers, the USS Nimitz and USS Ronald Reagan, to carry out exercises in the waterway, and the Reagan recently returned.

“When we [the US] sent our ships through, they [China] started doing naval exercises in the vicinity just to kind of show the flag and show that they are not intimidated. We then responded by flying a U-2 spy plane overhead, and they responded by firing a few missiles into the area from land showing that they have the ability, if necessary, to sink our ships, including our carriers. So, this becomes a game of chicken, which is extremely dangerous,” Wong explained.

“It could easily escalate into a shooting confrontation, which could escalate into a war. A lot of the bases China would be firing missiles from would be close to some of their nuclear missile facilities, which means that if we counterattack, the Chinese don’t know whether we are aiming at their conventional forces or their nuclear forces. Also, many of our ships at sea are either nuclear-powered or have the ability to fire nuclear missiles,” Wong noted.

“So, the possibility of an actual nuclear war becomes a real possibility, and this is extremely dangerous,” he added.

Late Thursday, Colonel Li Huamin, a spokesperson for the Southern Theater Command of the People's Liberation Army, accused the US of violating Chinese maritime borders.

"Ignoring the rules of international law, the US side has repeatedly provoked troubles in the South China Sea, exercising navigational hegemony under the pretext of 'freedom of navigation,'" Li said. "We urge the US to stop such provocative behavior and restrict its maritime actions to avoid possible military accidents.”

The US Navy has denied any wrongdoing, claiming that the USS Mustin was carrying out a "routine" operation.

“The US has, ever since the Cold War, been pursuing a policy of dominating the world, being able to dictate to other countries what they can or can’t do, overthrowing governments around the world and trying to become the sole superpower to the point where they can dictate anything and everything to any country they want to, friendly or not friendly,” Wong explained.