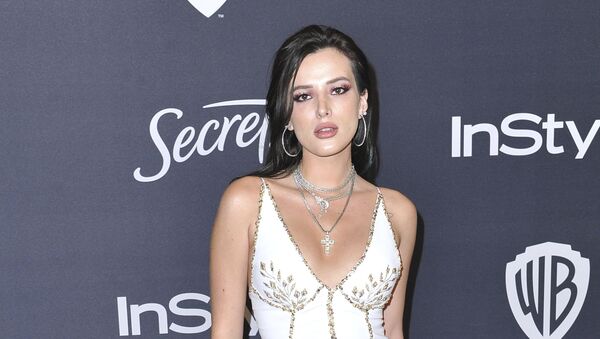 © AP Photo / Richard Shotwell
Subscribe
The former Disney Channel actress launched her page on the hugely popular adult website earlier this month saying she was seeking to learn about the nitty-gritty of such X-rated businesses and is planning to use the raised funds for charity.

According to OnlyFans, the site’s newbie Bella Thorne has reportedly racked up a record over $1 million within 24 hours of debuting her profile, netizens have gone on the rampage accusing her of a blatant scam: some fighters for justice said she had cajoled her fans into paying for the content that wasn’t there.

"She literally scammed her subs into buying 3 photos for $200 with no nudity whatsoever", a user named pail_z fumed, stressing that "showing a bit of side boob is not nudity".

There is now a maximum post price of $50 and it takes 30 days for the money to be released to our balances now! Thanks so much, good luck with your movie about onlyfans! (An industry you know nothing about) @bellathorne #BellaThorne https://t.co/IXuQLQWn7y

There appeared many more frustrated netizens over the matter:

Bella Thorne, thank you for reaffirming what everyone already thought about you. pic.twitter.com/hso5A4YEGD

i don’t care if celebrities make onlyfans but bella thorne fucking up the entire dynamic of the platform and changing how tipping works and how payouts work is so fucking infuriating. what a literal cunt

"She’s already rich. I'm tired of celebrities doing sex work for fun bc it's trendy. They won't ever have to deal with the real struggles and fears that civilian sex workers deal with", another disappointed netizen wrote, suggesting that Thorne should donate the revenues.

Some, however, defended the former Disney Channel actress, implying there is nothing wrong in capitalising on the already existing trend.

I see a ton of people bashing her for.... Existing and making money? Wisely capitalizing on a trend? The only thing I see is the site needs to fix its shit

Even memes on the subject were widely shared online:

What Bella Thorne promised you on OnlyFans vs What you got pic.twitter.com/PNfzbGNuCl

"F*** Bella Thorne. She didn't just ruin OnlyFans for small creators, she ruined it for everyone", another user shared his frustration, echoing many others:

OnlyFans is a subscription adult site known for its diverse NSFW content which has recently been attracting more celebs to participate including rapper Cardi B.

Thorne announced the launch of her OnlyFans page on her verified social media on 14 August.

The 22-year-old actress and influencer has been using the platform to share personal content and never-before-seen photos and videos for a subscription rate currently set at $20 a month, with a 6-month discounted offer costing avid viewers $102. The recent updates include a series of snaps from Bella's Los Angeles home, among them sultry images of the former Disney star sunning herself in a variety of bikinis, as well as casual domestic shots of the actress and her pet dog.

Thorne shared with the Los Angeles Times that she intends to use her OnlyFans earnings for her production company and charity, as well exploit its content and experience there as fodder for her would-be film – about the "ins and outs" of such a platform.

"What's the connective material between your life and your life inside the world of OnlyFans?", Thorne wondered, suggesting the service might bear a lasting effect on the public:

"How can it change your life for the worse and the better? How far are you willing to go, and how far do you WANT to go? You can be me, or this talented girl from Montana, and OnlyFans could change your life — if you want it to, of course".