New Luxury Prop Plane Boasts Speed of a Jet, Fuel Efficiency of a Car And Fraction of Costs 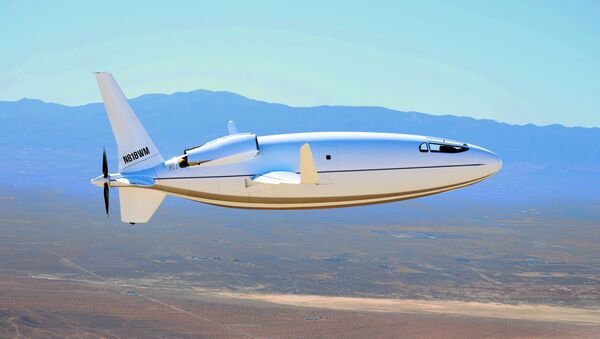 James Tweedie
All materialsWrite to the author
Otto Aviation’s Celera 500L could carry six business passengers at 450 mph at around 20 miles per gallon thanks to a new high-efficiency piston engine.

A new space-aged propeller plane could overtake business jets at a fraction of the running costs.

California-based Otto Aviation claims its prototype Celera 500L can cruise at 450 mph, with a continental range of 4,500 miles.

But the most striking boast is an environmentally-friendly fuel efficiency between 18 and 25 miles per US gallon (mpg), comparable to a large car.

"Our goal was to create a private aircraft that would allow for direct flights between any city pair in the U.S. at speeds and cost comparable to commercial air travel," company founder, chairman and chief scientist William Otto said.

A video released by Otto Aviation on Wednesday shows a successful test flight of the highly-streamlined aircraft from, which carries the Federal Aviation Administration registration number N818WM, from the Southern California Logistics Airport in Victorville.

The secret of its exceptional fuel economy is its high-efficiency Raikhlin Aircraft Engine Developments A03 V12 engine, mounted at the rear and driving a four-blade pusher propeller, which generates between 500 and 600 horsepower.

Otto, who formerly worked on nuclear rocket engines at the Los Alamos Scientific Labs, believes his plane could put private air travel within the budget of an ordinary family.

"Innovation at its core is solving a problem without conventional bias," he said in a press release on Wednesday.

"In many cases, individuals and families will be able to charter the Celera 500L at prices comparable to commercial airfares, but with the added convenience of private aviation," he stressed. "We believe when the price of private air travel is competitive with commercial air travel, an enormous market opportunity will result."