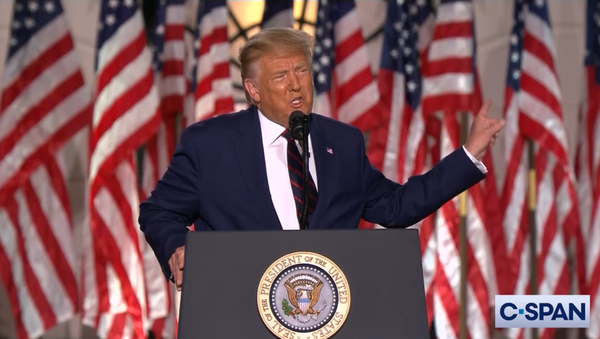 © Sputnik Screenshot
Subscribe
On Thursday night, US President Donald Trump delivered a fiery acceptance speech after being nominated by the Republican Party to run for a second term in November. A journalist told Sputnik that Trump is given space to spin lies about an imaginary adversary by a mainstream media that long ago gave up its duty to be critical of politicians.

In a speech at the White House on Thursday that lasted more than an hour, Trump presented himself as a defender of the United States against forces threatening to destroy it - forces that would be mobilized if Democratic nominees Joe Biden and Kamala Harris took office.

Lee Camp, the host of RT America’s “Redacted Tonight” and author of the book “Bullet Points and Punch Lines: The Most Important Commentary Ever Written on the Epic American Tragicomedy,” told Radio Sputnik’s Loud and Clear on Friday that Trump poses a serious danger to Biden because he knows how to manipulate the narrative to energize his base, while the Democrats have ignored the progressive forces that could mobilize theirs.

“One of the most hilarious things was his depiction of Joe Biden,” Camp said. “I mean, just lies. Joe Biden is not a socialist; Joe Biden is a neoliberal war hawk who’s locked up more Black people than perhaps anyone in American politics.”

One such example given was Trump referring to Biden as a “Trojan horse for socialism” while also positioning himself as a champion of the country that “toppled” fascism - two totally contradictory ideologies.

“I think a lot of Americans, sadly, do believe these speeches or think there’s a lot of truth in them,” Camp said. “I think that that space for him to lie at this level, and when he’s called on it it doesn’t matter, was created by a mainstream media that no longer speaks anything near the truth.”

“It enrages me to hear that MSNBC will giggle and laugh … at how much he had lied,” Camp said, “but they won’t tell the truth about Joe Biden, they won’t tell the truth about our endless wars under every president over the past several decades. So when they are lying so successfully on mainstream media, when Trump is called on his lies, it no longer has veracity, it no longer grabs people’s attention as truth. So I think that the space for Donald Trump to put forward these incredible lies was created by our politicians and our mainstream media.”

“If I can give one example: he said ‘We are one national family, and we will always protect, love and care for each other.’ This is possibly the biggest lie of the entire night. It’s like, ‘Oh, I love all my children, except Blacks, Mexicans, immigrants, women, protesters, trans people, gay people, the disabled, the homeless, the CDC, scientists, Muslims’ - not to mention anybody in another country.”

“It’s such an utter lie, and then Joe Biden and Kamala Harris say the same crap, and they also lock up an endless number of people. They just maybe hate slightly different groups or slightly different levels of certain groups. But that’s what allowed Trump to do this,” he said.

Camp noted that after the Democratic National Convention last week, which was intended to bring together disparate camps in the Democratic Party and unite them behind the Biden/Harris ticket, polls showed virtually no change in Biden’s standing against Trump.

This, he said, means that the November vote is likely “going to come down to turnout and to suppression” of votes, the latter of which he noted has been “incredibly high, as it is every year, but the Democrats completely failed to ever stand up against it, other than a bit complaint here and there.”

“If the Democrats wanted to create the kind of enthusiasm that would get someone to stand in line for three hours to vote, then they would have some actual progressive ideas put forward, they would have allowed a progressive candidate to win if they were going to win, and they would actually be talking about progressive ideals. But they’re not, because they’re a neoliberal, corporatist party, as are the Republicans,” he told Sputnik.

This, too, is an area where Trump has already outpaced Biden, Camp noted. “Trump has kind of done something brilliant, which is [that] he realizes in order to get people enthusiastic about voting, you need to create a very stark dynamic between the two sides. But in reality, on so many of the core issues of America and the world - whether it’s the endless wars you were talking about, or Wall Street greed, or inequality - just on so many levels,” he said, the parties are quite similar, including their stances on “the prison-industrial complex and policing. We know Joe Biden’s not actually going to defund the police - he’s said so - or even attempt to.”

“So there is very little space between them. So Trump has decided to create some fake villain that his voters should come out to vote against, which is kind of brilliant, on his part. The Democrats, on their side, have also kind of created somewhat of a fake villain, because they try and act like his form of fascism is so much worse than what Democrats have achieved in their time in office.”

“But you’re right, it is these kind of tinkering around the edges that is the actual difference, which is why you see Democrats getting serious about the Hatch Act. Yes, I would prefer Trump not violate the Hatch Act, but something tells me that giving a speech on the White House lawn is not the greatest crime of the Trump presidency. But the Democrats don’t want to talk about innocent civilians getting obliterated overseas at the tens of thousands, because that’s something they are involved in, too. They hardly even want to talk about inequality, because a lot of that inequality came about under [former President Barack] Obama and just continues at record pace.”

000000
Popular comments
That's the point, he lies all the time , that's his brief . His Dad educated him well . If you can get away it , then it's the proper thing to do , you must try anything to make America great again . Trump doesn't have to rely on Corporate Media , it's placed securely in his pocket all the time .