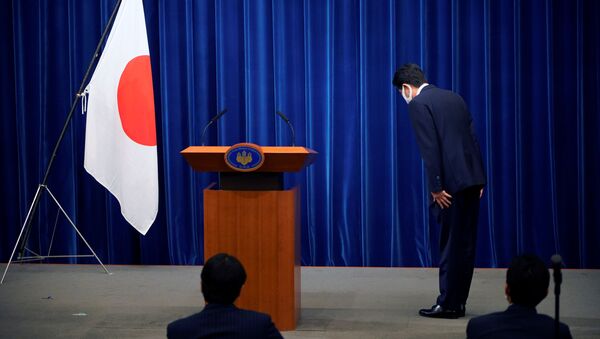 "It is gut-wrenching to have to leave my job before accomplishing my goals," Abe said at a news conference on Friday, as translated by Japan Today.

Suffering from a recurring chronic illness in his lower digestive system, the choice of words seems apt.

Given that among his lofty goals were ambitions such as repealing the US-imposed pacifist post-war constitution, reviving Japan’s military might, settling a peace treaty with Russia with the Kuril Islands on the Japanese side all while reversing a perennially stagnating economy — the question of whether he would have been able to achieve his goals at all begs itself.

Abe said he would continue to participate in political life and run in upcoming elections. Having resigned from his first premiership in 2007 for health reasons (in addition to numerous scandals), the 65-year-old has room to continue writing his family name in Japan’s history.

Even as a child, Abe had unique achievements in Japan’s political history. He boasted not one, but two relatives, both from the paternal and maternal sides, to have served prime ministers.

Abe was born in Tokyo in 1954 to a prominent Japanese family with deeply entrenched in Japanese politics from the Meiji Restoration to both sides of World War II.

Abe contributes his conservatism to the abuse he received over his controversial grandfather’s legacy. Nobusuke Kishi, Japenese prime minister from 1957-1960, is better remembered in Japan for his brutal rule over and exploitation of Japan’s colonies in China and Korea during Japan’s imperial era.

Despite this, Abe’s family was reinstated to Japan’s political elite during the US administration after the war for their staunch anti-communist and conservative stances.

Throughout Abe’s upbringing, he witnessed family members ascend and occupy prominent positions in politics, diplomacy and the military.

After the death of his father, Shintaro Abe, who headed the Liberal Democratic Party (LDP) and occupied various top ministerial posts, Abe’s election to the upper house of parliament, the National Diet, and the leadership of the party seemed a rite of passage.

Just this Monday, Abe eclipsed his great-uncle Eisaku Sato as the longest-serving head of government in the country’s history.

Abe’s first stint in 2006 lasted only a year and was dogged by controversy and scandal. His resignation later revealed to have been due to Abe’s ulcerative colitis, began the so-called era of revolving doors in which saw six governments come and go in six years.

His 2012 return ushered in a sense of political stability, having secured a super-coalition in the legislature’s lower house with the power of overturning the upper chamber’s decisions. Abe began to implement his long-term political and economic goals.

Contrary to what many observers had expected from the poster child of Japanese nationalism, Abe formed his cabinet with the express goal of halting the deceleration of the economy, which had been stuck in a slow recession since 1989.

Abenomics, as it was soon dubbed, was replete with liberal economic policies harkening back to the best traditions of Ronald Reagan and Margaret Thatcher.

Despite some quick-hit successes such as noticeable job creating and an increase in money flowing foreign investment into the country, Abenomics was only able to inch the economy above the zero-growth metric for a few quarters in 2014. The already stratospheric national debt increased only more under the policy, making Japan by far the most indebted country in the world.

By 2019, after several ill-advised tax hikes, no economist would rush to praise Abenomics. Having run out of steam before the coronavirus pandemic torpedoed any gains, Abe’s successor would need to decide on carrying through with the strategy.

Abe was reelected by the Diet in 2014 and did not wait long before calling on his countrymen to enact "most drastic reforms since the end of World War II."

The heir of his grandfather and great-uncle, Abe set his sights on the main ambition of Japenese nationalists: to repeal what they consider the humiliating pacifist constitution imposed on the country during the United States’ seven-year administration. The constitution limits Japan’s military buildup and shackles its foreign policy from engaging in conflict.

With Abenomics underway, Abe pushed his cabinet to hike military spending, bolster patriotic education and reinterpret Article 9 of the constitution to allow the Self-Defense Forces to be deployed alongside allies in foreign conflicts.

Under Abe, the Japanese red-sun flag on military fatigues in Middle Eastern deserts became less of an unusual sight.

However, a complete overhaul of the constitution remained politically unfeasible for Tokyo owing to public disapproval of such a move. Every action of the Abe government towards bolstering the defence sector was consistently met with protests.

Japan’s refusal to install the controversial US-made air defence system, Aegis Ashore, due to cost consideration in 2020 was a sign of Abe’s defence bravado whimpering out under public pressure.

Abe’s father served as a foreign minister in the 1980s, no doubt imparting some diplomatic influence on his son.

Abe has been able to successfully steer personal relationships with world leaders, especially of the United States, Russia and China, to bolster Japan’s foreign profile.

Abe remains one of the few world leaders to have successfully courted a warm relationship with US President Donald Trump and his polar opposite predecessor, Barack Obama.

In 2016, he made history with President Obama by laying wreaths both at Hiroshima and Pearl Harbor in Hawaii.

He played golf with Trump in mid-2019 while the US trade war with China was having a downstream effect on Japan.

The prime minister made it a point to be present at every annual Eastern Economic Forum and take part in plenary sessions along with Russian President Vladimir Putin.

He similarly flew high-profile delegations to every annual Trilateral China-Japan-South Korea summit, even taking flak from the media over excessive travel expenses.

But similar to Abe’s economic policy, the jury is still out on just how effective the foreign policy has been.

A peace treaty with Russia remains elusive as the Kuril islands remain a contentious issue. The World War II-era declaration of war remains unsettled with the Soviet Union’s successor state.

Frosty relations with China have ebbed and flowed as Japan has failed to play any decisive role in the trade war between the two.

A detente with South Korea after a historic apology issued over the use of comfort women by Japanese military officers during the war eventually came to naught. A South Korean court ruling for compensation to victims of forced labour during that prompted an unprecedented trade spat between the two.

Final Blows: The Olympics and COVID-19

When Tokyo was selected to host the 2020 Summer Olympic Games in September 2013, a first-tenure Abe expected the event to put a sheen on his legacy.

A dejected Abe could be seen walking out of negotiations with the International Olympic Committee in March 2020 to declare the postponement of the Games amid an accelerating pandemic.

The pandemic had robbed Abe of what little economic achievements he could have boasted and put a dent in his image.

Not only did he have the dubious honour of preceding over the largest economic contraction in the country’s history, but his declaration of a stare of emergency was panned as coming being belated and ineffectual.

Japan escaped an explosive growth in cases which many other nations saw, but little of the credit went Abe’s way. In the coronavirus response, he was often upstaged by Tokyo Governor Yuriko Koike.

By the time Abe’s chronic ailment resurfaced, Japan was in the midst of a second wave, recording around 1,000 cases of COVID-19 infection daily.

Many world leaders bid messages of lamentation, Godspeed and farewell to the Japenese leader upon Friday’s announcement.

Shinzo Abe: Key Highlights of His Time as Longest-Serving Japanese Prime Minister
The Kremlin said Abe made an invaluable contribution to Russian-Japanese ties and underscored his commitment to resolving all disputes, even the most difficult ones.

The European Union sang his praises for helping make Japan a "pillar of today’s multilateral system."

It remains to be seen whether Abe’s successor will pick up the mantle of his many ambitious goals or take the confluence of the resignation with the pandemic’s resetting of the economy as a signal to turn to a new page.