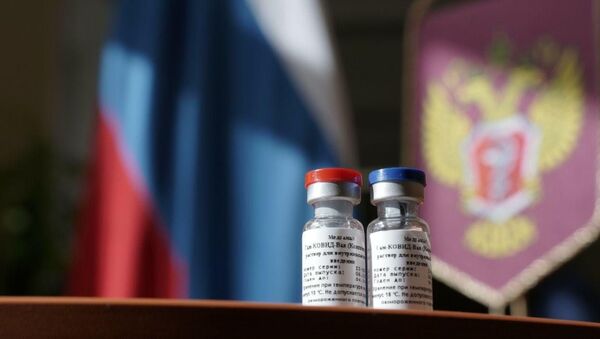 Following the announcement of the world's first COVID-19 vaccine on 11 August, Russian President Vladimir Putin said that one of his daughters had been inoculated with it.

In an interview with the Rossiya 24 broadcaster, Russian President Vladimir Putin revealed that his daughter, who was vaccinated against COVID-19 earlier this month, has developed antibodies against the virus.

"It is quite obvious today for our specialists that this vaccine forms a stable immunity, induces antibodies, just like my daughter did, and it [the vaccine] is harmless, thank God, my daughter is feeling well", Putin said during his appearance on the Rossiya 24 news channel.

The president added that on the first day after taking the vaccine, his daughter’s temperature rose to 38.4 degrees Celsius, and on the second day, it was slightly "over 37" degrees Celsius.

He also revealed that a second Russian vaccine against COVID-19 will be ready in September.

On 11 August, the Russian government officially registered Sputnik V as the world's first vaccine against COVID-19.

Although the vaccine is still going through the third — and last — phase of clinical trials, as per the protocols of the World Health Organisation, Russian health officials have said it has proven that it has the capability to produce stable immunity against the coronavirus.

Despite the fact that the Russian Ministry of Health stressed that Sputnik V had undergone all the necessary checks and had been proven to be capable of building immunity against the virus, Western countries and mainstream media rushed to claim that the vaccine was unsafe and ineffective.