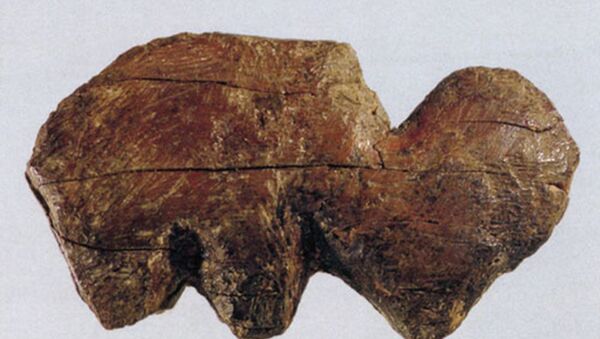 Researchers from Siberian Federal University (SibFU) and the Institute of Archeology and Ethnography of SB RAS have discovered ancient artefacts during excavation works in the Ust-Kova area of the Krasnoyarsk region.

According to the scientists, some of the artefacts, which are more than 24,000 years old, indicate that the ancient inhabitants of Siberia had a high level of technological development and sophisticated religious views. This suggests that the region was a major centre of civilization in the Paleolithic era. The research results were published in Archaeological Research in Asia scientific journal.

According to scientists, the pieces of ancient art indicate the nature of emerging religious beliefs and clarify the evolution and origin of Northern Eurasian ancient technologies, as well as show who the first inhabitants of Siberia maintained contact with.

The authors of the research point out that scientists have been studying the multi-layered site of ancient people in the area of the flooded Ust-Kova village in Krasnoyarsk Territory for more than 50 years.

"The research team has conducted a detailed microscopic analysis of each object, including two figurines carved from mammoth ivory, to see traces of the tools used to make them. The research was conducted under the guidance of Lyudmila Lobova, Doctor of Historical Sciences, Professor at the Department of Archeology and Ethnography of Novosibirsk State University,” Nikolai Drozdov, Doctor of Historical Sciences, Professor at SibFU’s Department of Russian History, said.

Drozdov said that having processed microscopic images of a mammoth figurine made from a large ivory fragment, the researchers managed to restore the ivory processing technology used by ancient craftsmen.

"The ivory processing methods and techniques used by Ust-Kova inhabitants make these artefacts similar to ancient pieces of art found at the Mal’ta Site on the Belaya River in the Irkutsk region," the scientist noted.

According to the researchers, this proves the existence of cultural and technological ties between the ancient inhabitants of Siberia, who had established river communication.

"The found mammoth figure is painted on both sides: one side is red, the other is black. This indicates that the ancient people had religious views associated with life and cosmic ideas, because red is the colour of blood and life, while black means darkness and death," Nikolai Drozdov said.

According to the scientists, at the SB RAS in Krasnoyarsk, they are currently studying with spectral analysis methods the technology of making such paints.

It’s already known that the ancient craftsmen used ocher to create red shades, manganese and magnesium for burgundy colours, and wormwood and sedge juice for dark blue, the researchers said.

According to the scientists, next they will be studying rock paintings of the Neolithic, Bronze and Iron Ages in the Motyginsky region of the Krasnoyarsk Territory, in Khakassia and Tyva. Archaeologists plan to conduct a detailed study of the composition of the paints used for rock art.

The researchers said that among the other artefacts found in Ust-Kova are of great interest as well. Among them is an 18,000 year-old graphic image of a horse made on a mammoth tusk plate, the first one f its kind seen in Siberia.

"Apart from numerous pendants, beads, fragments of bracelets, elongated buttons and painted rings, these works have maintained good condition. They are unique and are of great importance not only for Russian but also for global archaeology,” Drozdov said.

The authors of the study point out that, in addition to artefacts from the Ust-Kova site in the Krasnoyarsk Territory, there are other interesting finds relating to ancient cultures.

"For example, an 18,000-year-old bone with point spiral-like images. Most likely, the ancient Siberians used it as a solar-lunar calendar,” Nikolai Drozdov said.

According to the scientists, a Bronze Age shaman’s grave was discovered at the site of the Boguchanskaya hydroelectric power station more than 50 years ago. Two anthropomorphic mammoth tusk figurines were also found there; in their eyes, they had beads of white pyrophyllite, which is concentrated in Western Asia.

Such artefacts, experts believe, along with those found in Denisova Cave in Altai, prove that the peoples who inhabited Siberia in the Stone Age were highly developed and were in no way inferior to their contemporaries from the territories of modern China, Spain and France.