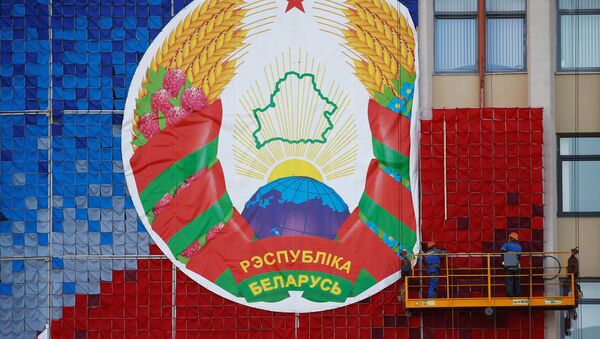 Irina Acheeva
correspondent
All materialsWrite to the author
Over 6,700 people were detained in Belarus during the first several days of mass protests following the 9 August presidential election, according to official figures. Hundreds have been injured in the unrest, including more than 150 law enforcement officers.

Russian President Vladimir Putin has commented on the protests in Belarus, noting that the situation is stabilising.

Moscow has formed a special reserve of law enforcement servicemen at Minsk's request to help Belarus if required, Putin said.

"There is no need to hide anything. There are relevant articles that say that all member states of the organisations... should provide each other with assistance and protection of sovereignty, external borders and protection of stability. In this regard, we have obligations to Belarus, and Alexander Grigorievich Lukashenko raised the question that he would like us to provide him with appropriate assistance, if necessary. I said that Russia will fulfill all its obligations", he stressed in an interview with Rossiya 24 broadcaster.

"During our talks with Alexander Grigoryevich, we came to the conclusion that there was no such need now, and, I hope, there won't be. And therefore we do not use this reserve", Putin added.

He also stated that Russian forces will not be used "as long as extremists in Belarus do not cross any borders".

"They will not be used, until extremist elements, hiding behind political slogans, cross certain borders, simply start robbing, start setting fire to cars, houses, banks, try to seize administrative buildings, and so on", Putin noted.

Belarusian President Alexander Lukashenko also commented on the protests, claiming that around 3 million of his supporters have taken to the streets across the country amid the post-election unrest. He also noted that this year has brought a lot of tribulations, such as the closure of many markets, the full-fledged movement of goods and capital practically ceasing due to the coronavirus pandemic, and now the difficult political situation in the country has been added to this situation, which, in his words, is being rocked both "from the inside and from the outside".

The president's statement comes amid a tense situation in Belarus which has seen mass protests since 9 August. The presidential election witnessed Alexander Lukashenko re-elected for a sixth term with over 80 percent of the vote, while the opposition has insisted that Svetlana Tikhanovskaya, an opposition candidate, won the election.

World
Libyan Embassy in Belarus Attacked by 30 People, Charge d'Affairs Says
Police cracked down on demonstrators during the first several days of the protests, but have since halted the excessive use of force. More than 6,700 people were detained during the first days of the unrest. According to the Belarusian Interior Ministry, three people died and several hundred others sustained injuries during that period, including more than 120 security officers.

The Coordination Council of the Belarusian opposition was founded on 14 August. According to its leadership, their goal of a peaceful transition of power is perfectly in line with Belarus' Constitution.

The Belarusian authorities assured that the council seeks an unconstitutional grab of power and is endangering national security. Under a case, launched by the country’s Prosecutor General's Office into the matter last week, the Coordination Council's leadership members are being questioned as witnesses.