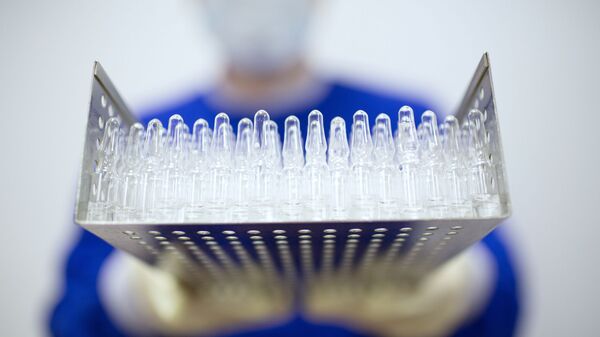 © Photo : Press service of AFK "Sistema"
/
Go to the mediabank
Subscribe
International
India
Africa
As Moscow announced the beginning of post-registration trials of anti-COVID vaccine Sputnik V on 26 August, the US added a group of Russian research institutes, including the one testing the anti-coronavirus drug, to its sanctions list. International observers have discussed the US move unveiled amid the global effort to curb the pandemic.

According to a statement, released by the US Department of Commerce on Wednesday, the Bureau of Industry and Security (BIS) has amended the Export Administration Regulations (EAR) by adding sixty entities under the destinations of nine countries to its sanctions list. These entities have been determined "to be acting contrary to the national security or foreign policy interests of the US" and will be subjected to restrictions on the export, re-export, and transfer of goods to them.

One of the aforementioned entities listed in the US Commerce Department's new rule is the 48th Central Research Institute of the Ministry of Defence that participated in the development of the Russian anti-coronavirus drug together with the Gamaleya National Research Centre and, according to June press releases, tested the vaccine for toxicity, safety, immunogenicity, and protective efficacy. However, Washington has claimed that the Russian institutions on the list are working on chemical and biological weapons falling short, however, of presenting any evidence to back up the assumption.

'A Crime Against Humanity'

"The sanctions that the United States adopt against the vaccine research institutes of the Russian Federation constitute a serious attack against the freedom of autonomy of scientists, not only Russians, but all over the world", says Tiberio Graziani, head of the Italy-based Vision and Global Trends International Institute for Global Analyses.

According to the Italian scholar, the recent ruling amounts to nothing short of "a crime against humanity, as it puts a cutting-edge research centre on vaccine research in difficulty".

Russia announced the registration of the world's first coronavirus vaccine, based on the well-known adenovirus platform, on 11 August and was immediately subjected to a firestorm of criticism from Western politicians and media pundits who threw the drug's efficacy and safety into question. According to American and British pharma companies, their most advanced vaccine candidates, including Moderna's mRNA-1273 and AstraZeneca's AZD1222, will be ready by October-December and become available no sooner than early 2021.

"With these sanctions, Washington is trying to slow the development and production of the Russian vaccine against COVID-19 in an absurd struggle for scientific supremacy", suggests Graziani. "The reason behind the sanctions seems to be specious.​ It belongs to the Western narrative and is part of the hybrid war that since the Gulf War has formed the plot of the aggressive actions of the United States against countries that are beyond their control".

Instead of teaming up with other countries to bolster research and production of a new vaccine and curb the spread of the pandemic which has already claimed the lives of more than 825,000, the US chooses to politicise the fight against COVID-19 and "exploit the serious health situation for geopolitical, economic, and power purposes", the scholar highlights.

"​This is yet another move to use sanctions as a means to counter fair competition and to block markets from life-saving solutions", echoes ​Earl Rasmussen, researcher and executive vice president of the think tank Eurasia Centre. "It's unfortunate,​ in our current environment, that nations are not working jointly and openly to support vaccine development and together fight this global health risk".

With AstraZeneca starting antibody drug trials in the UK, it makes perfect sense for the US to make an anti-Russian move against "Putin's Russia vaccine" in order to promote the credibility of its main ally, Britain, observes Adriel Kasonta, a London-based political consultant.

"Allowing a competing nation, and old-time foe, to be seen as a positive force in the world goes against the Pentagon's raison d'etre and confuses anti-Russian MSM in the West what to make out of this", he remarks. 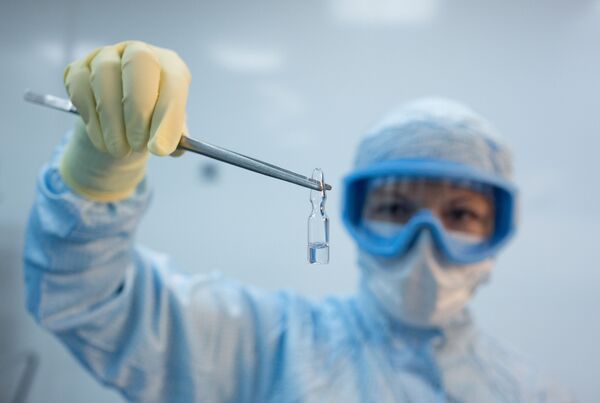 "The US at this historical moment is in great difficulty and is afraid of losing its technological and scientific leadership", deems Tiberio Graziani.

There is no doubt that the Western hemisphere - with a leading role played by the US and UK - perceives itself as the benchmark of success and every "good" development, according to Kasonta.

"The US wants to keep the monopoly on the feeling of glory as a savior of the world", the London-based political consultant believes. "It directly relates to their inherited nature of exceptionalism… In the economic sense, it aims at harming Russian research credibility and strength of Russia as a brand… Obviously, some may argue that the sanctions serve a purely strategic role: to keep Americans and the British in and Russians out from Western markets".

In the eyes of US policymakers Russia's lead in the race for an anti-coronavirus vaccine clearly goes against "the America-first idea", admits Andy Vermaut, a Belgian human rights activist and political commentator. However, though it is very painful for them, the Americans are not always the first in everything, he stresses, adding that "on a scientific level, the United States is not always the most advanced either".

"That has everything to do with too little investment in its educational institutions", the activist says. "There is also something seriously wrong with the school system in the United States. This is mainly due to the fact that defence absorbs far too much of their budget. The United States mainly wants to be able to bark at others, and then of course it is useful to keep your population as stupid as possible, which is why the Russian innovations could get people thinking".

In order to divert public attention in the US away from its flaws in handling the coronavirus pandemic, Washington goes on the attack "to demonise Moscow as much as possible" since "Russia as an innovative centre on the world stage does not fit in that story of American imperialism, with which it feels embarrassed", Vermaut suggests. "And of course NATO must be able to further confirm its raison d'être in order to keep the money flowing", he adds.

Vermaut and Graziani agree that Washington's latest move has a lot to do with the unfolding political struggle within the country and upcoming presidential elections. Republican nominee and incumbent President Trump has yet again resorted to "muscular" politics "to create the impression that he is the leader who dares to act against Russia", according to the Belgian activist. "All these reinforce the story that Americans have to believe", Vermaut says.

"Fortunately, there are already many people who can place the sweet lie of the American propaganda machine, a pity that they are now translating it into policy and that a renowned Russian research institute will be the victim of this", he emphasises. "I conclude that Russia is often condemned before the actual facts are known".