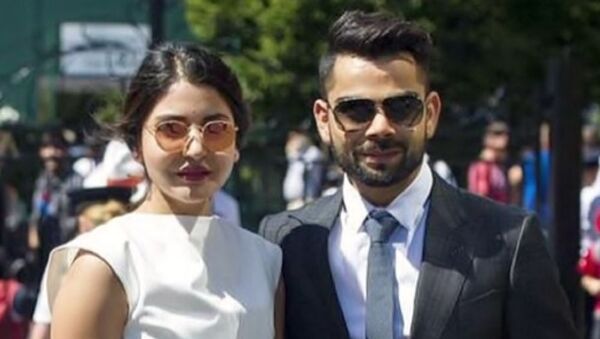 CC BY-SA 3.0 / Koimoi / Virat Kohli and Anushka Sharma
Subscribe
New Delhi (Sputnik): Bollywood beauty Anushka Sharma married Virat Kohli, captain of the Indian cricket team after a long courtship in December 2017. Their dreamy, fairy tale-like wedding was a private function in Milan, Italy and pictures from the ceremony broke the internet. The couple is now ready to step into the next stage, parenthood.

Both Anushka and Virat on Thursday took to Instagram to share the announcement of their first baby with an adorable snap.

The picture shared by the couple shows the expecting mother in a black and white polka dot dress being cuddled by the soon-to-be-daddy along with the caption, “And then, we were three! Arriving Jan 2021”.

A bunch of Bollywood celebrities including Priyanka Chopra Jonas, Alia Bhatt, Kriti Sanon and Ishan Khatter among others dropped in wishes and love on Anushka’s post. On the other side, Virat’s post garnered congratulatory greetings from sports stars including Chris Gayle, Harbhajan Singh, Sania Mirza, and others.

The news created ripples on Twitter. Wishes for the couple and memes on the topic have already begun trending.

Virat and Anushka announce they are expecting their first child !