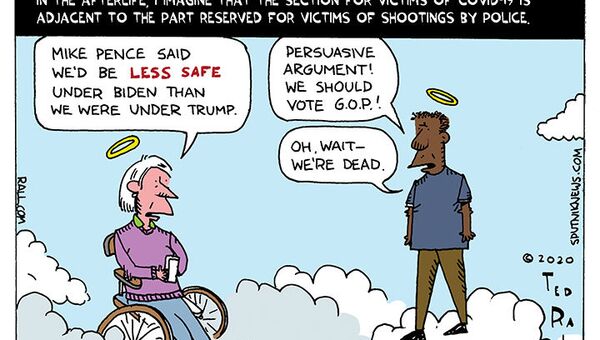 © Sputnik / Ted Rall
Subscribe
International
India
Africa
US Vice President Mike Pence told viewers during the Wednesday broadcast of the Republican National Convention that US lives “won’t be safe” under a Biden administration, appearing to completely disregard the fact that Republicans are heading the current government and that many Americans aren’t safe at the moment.

"Let me be clear: the violence must stop – whether in Minneapolis, Portland or Kenosha," Pence said, referring to recent protests in the US prompted by the continued police shootings of unarmed Black Americans. "The hard truth is, you won't be safe in Joe Biden's America."

As if the whole of the GOP were wearing blinders, Republican officials seem to be ignoring that Trump’s America has seen hundreds of thousands of US lives lost over the poor handling of the COVID-19 pandemic, and that Black Americans have repeatedly been subjected to excessive force by police, as demonstrated by the cases of Jacob Blake, George Floyd, Breonna Taylor and Atatiana Jefferson.

Safe, adjective: to be protected from or not exposed to danger or risk; not likely to be harmed or lost. It seems the Trump administration hasn’t put much focus on that concept in the nearly four years it’s been in power.