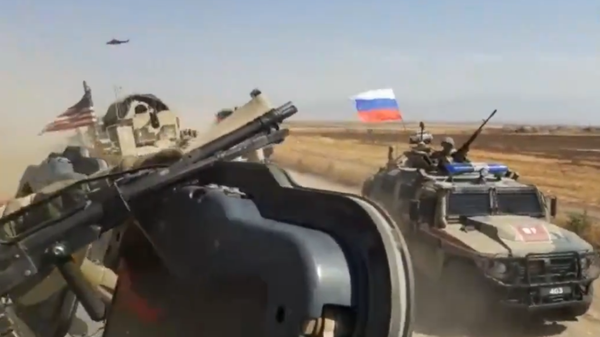 An official from the US National Security Council acknowledged on Wednesday that a day prior there had been a vehicle collision between Russian and American forces in eastern Syria.

On Tuesday, four US service members were reported injured with concussion-like symptoms in an incident involving Russian forces. However, White House National Security Council spokesperson John Ullyot said on Wednesday that the injuries were the fault of the Russians, and that the US service members withdrew to deescalate - a far different story than that told by video footage of the event.

"To de-escalate the situation, the Coalition patrol departed the area," Ullyot said. "Unsafe and unprofessional actions like this represent a breach of de-confliction protocols committed to by the United States and Russia in December 2019. The Coalition and the United States do not seek escalation with any national military forces, but US forces always retain the inherent right and obligation to defend themselves from hostile acts."

However, video footage and multiple reports of the event tell a different story. Video shot on the Russian side shows several US vehicles blocking a road, which the Russians then try to circumvent through a variety of tactics, including hovering low over the blockade with a helicopter and then attempting to drive around it. However, subsequent footage shows the US vehicles moving to block the Russian ones as they try to get past, until two of the Russian vehicles "sandwich" the American Mine-Resistant Ambush Protected (MRAP) vehicle between them.

Not shown in this video but another video shows the US MaxxPro MRAP being sandwhiched by a Russian Kamaz Typhoon APC and BTR-82A IFV/APC. I'd imagine that may have been the specific crash that may have injured the guys involved. pic.twitter.com/evlea7iHK0

It's unclear which collision resulted in the injuries to the US soldiers.​

Politico reported on Tuesday the Pentagon was prepared to state it was the Russian forces that pursued the American ones, according to a draft statement the outlet viewed.