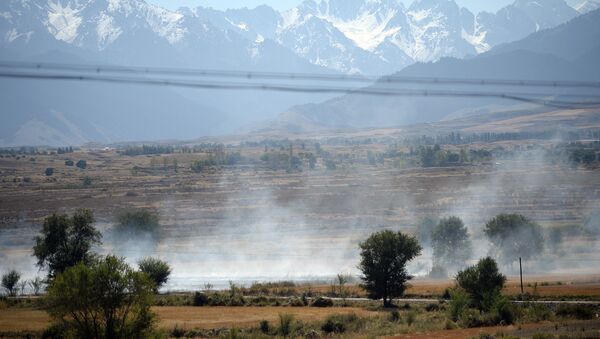 Svetlana Ekimenko
All materialsWrite to the author
The US and other primarily Western nations have repeatedly alleged that China is holding up to one million ethnic Uighurs and other Turkic Muslims in re-education camps in the Xinjiang region under the pretext of fighting terrorism and religious extremism, with Beijing dismissing all accusations of maltreatment of its Muslim minority as not true.

Discussions on the issue, which is seen as potentially fraught given the possibility of a further deterioration in already frayed ties between Beijing and Washington, are said to be in the early stages, and involve working level officials at the State Department, the National Security Council and the Department of Homeland Security, according to the publication.

The crime of genocide is generally interpreted as pertaining to acts committed with the intent of destroying a group “in whole or in part,” according to the United Nations.

In the event that the “genocide” designation fails to win enough consensus, other fallback options suggested by the administration sources are reportedly to brand perceived atrocities against the minority by the Chinese leadership as “crimes against humanity” or “ethnic cleansing.”

No details have been suggested regarding data, metrics and sources US officials might be studying to determine whether to use the genocide label.

Moreover, according to a cited former Barack Obama administration official, the situation “would highlight the limits of what any government can do, especially when dealing with a superpower that can block collective action at the United Nations.”

The State Department did not offer a comment on the report regarding the “genocide label” said to be under discussion.

“We are working hard to encourage the People’s Republic of China to cease its human rights abuses in Xinjiang and are constantly evaluating various measures,” a spokesperson was quoted as saying.

“The Chinese Communist Party’s atrocities also include the largest incarceration of an ethnic minority since World War II. Where the previous administration and many other world leaders delivered speeches and empty rhetoric, President Trump has taken bold action.”

There has been no comment yet from the United States Department of Homeland Security (DHS).

The genocide designation has been actively urged by activists and lawmakers of late. 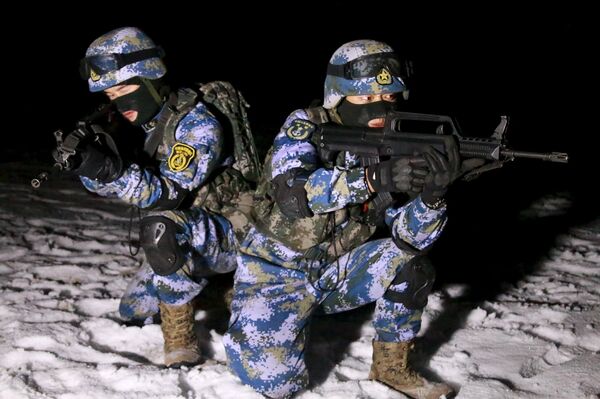 Soldiers of the People's Liberation Army (PLA) Marine Corps are seen in training at a military training base in Xinjiang Uighur Autonomous Region. The region has faced a string of attacks by separatist militants affiliated with Islamic extremists in recent years.
© REUTERS / CNS

Uighur rights groups have been leading the chorus of voices accusing the Chinese government of subjecting representatives of the minority to torture, forcing their women to get abortions and be sterilized, and demanding that people denounce Islam.

China’s Side of the Issue

Earlier this year China, which has rejected all accusations of wrongdoing, put on an exhibition in the lobby of its Chinese Embassy in Washington.

The over 40 panels presented were meant to dispel western allegations, and aspired to prove that the so-called camps were meant to teach Uighurs vocational skills and Mandarin, as a way of helping them secure jobs. 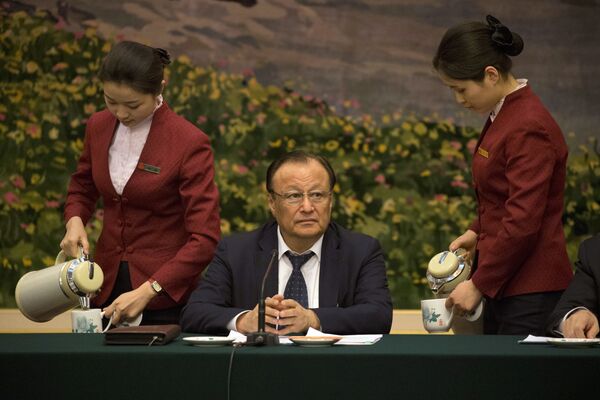 Shohrat Zakir, chairman of the Xinjiang Uyghur Autonomous Region, prepares to describe the mass internment of ethnic minority Muslims in the country’s far west as a system of training centers that saves Muslims from religious extremism by teaching them to speak Mandarin and accept modern science
© AP Photo / Ng Han Guan

Commenting on the fresh report, a Chinese Embassy spokesman was cited by the outlet as referencing comments made by the Ministry of Foreign Affairs spokesman Wang Wenbin a month ago.

“The issue concerning Xinjiang is by no means about human rights, religion or ethnicity, but about combating violent terrorism and separatism,” he said.

Genocide declarations are somewhat of a legal conundrum. The politically-sensitive pronouncements are rare, difficult to install and Washington officials have tried to dodge such declarations in the past, writes the outlet, suggesting that in theory, international law would subsequently require a degree of intervention from the US.

The report comes as Donald Trump has been increasingly frustrated with China, with the simmering trade friction between the sides further compounded by Washington’s accusations that Beijing allegedly mishandled the coronavirus pandemic, and labelling the respiratory disease the “China virus”.

Donald Trump has also followed through with executive actions to “reign in” China’s power, cracking down on TikTok and WeChat, social media networks owned by Chinese companies and accused of collecting data for the Beijing government, echoing similar government charges against Huawei Technologies.

China has repeatedly rejected all accusations of spying and other allegations of wrongdoing.