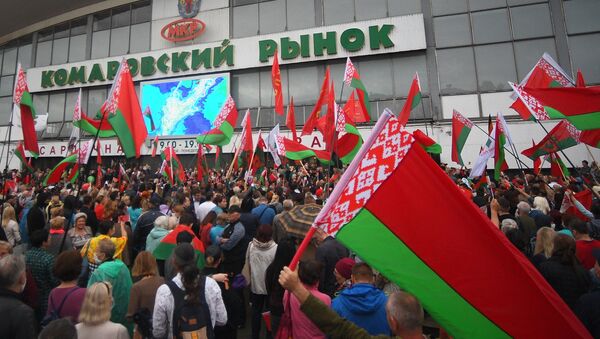 Subscribe
A rally in support of Belarusian President Alexander Lukashenko was held in rainy Minsk on Tuesday evening, while the opposition supporters gathered in another part of the capital.

The pro-Lukashenko rally took place near the Kamarouski market. It started at 7:00 p.m. (16:00 GMT) and lasted an hour and a half. According to the Belarus Interior Ministry, about 17,000 people, many of whom were carrying national flags and participated in the rally despite the rain.

"There were no more than 4,800 people at protests that took place in different regions. The largest number of the protesters was seen in Minsk, Brest and Molodechno," the ministry said.

Over the weekend, more than 100,000 protesters had convened in the capital for the second Sunday in a row demanding the president's ouster and smaller demonstrations were reported in provincial cities, according to opposition-leaning media.

Loudspeakers broadcast patriotic songs. People’s artists of Belarus, who performed songs during the rally, and ordinary demonstrators addressed the crowd, speaking up on the latest developments.

The rally ended with the crowd singing the national anthem. At that moment, the facade of the market building lit up in the colours of the national flag. No police reinforcements were seen in the area.

Mass protests broke out in Belarus after the August 9 election; incumbent President Alexander Lukashenko announced that he'd won his sixth term, with 80.1 percent of the vote. The country's opposition refused to recognise the results, claiming that the election was rigged.

BRUSSELS (Sputnik) – High Representative of the EU for Foreign Affairs Josep Borrell said that he had discussed the situation in protests-torn Belarus as well as other security issues during the bilateral meeting with NATO Secretary General Jens Stoltenberg.

On Wednesday, Stoltenberg arrived in Berlin for a two-day official visit to hold talks with German Chancellor Angela Merkel and join the EU defense ministers’ informal meeting. During the visit, he also held a meeting with Borrell.

“I thank @jensstoltenberg for his presence with EU defence ministers today. EU-@NATO cooperation remains crucial. In our bilateral meeting we also discussed the situation in Belarus, in the Eastern Mediterranean, Libya and @EUNAVFOR_MED but also Afghanistan and Iraq,” Borrell wrote on his Twitter page on late Wednesday.

On 17 August, Albanian Prime Minister Edi Rama and Swedish Foreign Minister Ann Linde, the current and incoming OSCE chairpersons-in-office, offered to come to Belarus to meet with the government and the opposition.

The ambassadors of the United States and the European Union on Wednesday welcomed Serbia's alignment with the EU declaration on the Belarusian presidential election.

His sentiment has been echoed by his US counterpart, Anthony Godfrey.

"Nice to see that Serbia stands with its European surrounding," Godfrey tweeted.

Searches are underway in the Minsk house of former contender for Belarusian presidency Valery Tsepkalo, a spokesperson for his campaign said on Wednesday.

"Veronika [the spouse] had a phone call with the relatives looking after the house," the spokesperson said, adding "Yes, searches are underway at the moment."

Tsepkalo's bid to register as a presidential candidate was rejected by the election watchdog. He is currently facing a criminal case in Belarus over alleged bribery. Tsepkalo and his family exiled in Poland.

11:44 GMT 26.08.2020
Kremlin Refrains From Commenting on Situation in Belarus to Avoid Meddling

The Kremlin will not give any assessments to events in Belarus, considering it equivalent to interference in another country's sovereign affairs, spokesman Dmitry Peskov said on Wednesday.

An interagency commission was created under the auspices of the Belarusian Prosecutor General's Office to check on allegations of the excessive use of force in response to protests, the Minsk jurisdiction said on Wednesday.

"Subdivisions of the Investigative Committee continue to conduct pre-investigation checks on the applications of citizens about the use of physical force and special means during mass events ... Each such check is taken under the control of the prosecutor's office. In order to coordinate and support the work on studying the circumstances set forth in the relevant appeals, an interdepartmental commission has been created under the auspices of the prosecutor's office," the Prosecutor General’s office said in a statement.

According to the statement, this commission includes representatives of the Prosecutor General's Office, the Investigative Committee, the Ministry of Internal Affairs and the State Committee for Forensic Expertise. Lawmakers of the lower house of parliament of the republic will also take part in the work of the commission.

The press service added that the purpose of the pre-investigation checks is "to objectively, fully and comprehensively understand the situation," to establish the presence or absence of signs of crimes in the actions of law enforcement officers and units during the arrest, delivery and detention of citizens.

000000
Popular comments
Even the Opposition's own exit polls confirmed that President Lukashenko won the election with 62% of the vote - That should be more than enough for the opposition to accept the results. Anyone protesting now are simply sore losers.