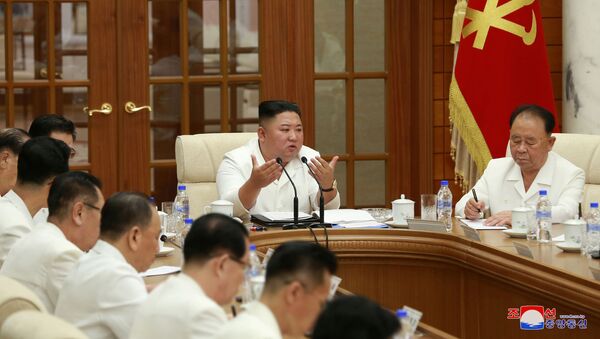 © REUTERS / KCNA
Subscribe
Ilya Tsukanov
All materialsWrite to the author
Tabloids, US government-funded media, and a throng of unnamed sources and ex-officials have been speculating about Kim Jong-un’s health for months, with the North Korean leader reported missing and presumed dead or gravely ill at least four times in 2020. The rumours vanish each time Kim makes a public appearance, only to surface again soon after.

Workers’ Party of Korea Chairman and North Korean supreme leader Kim Jong-un has reappeared in public after a two week absence, with photos and video of him chairing an enlarged meeting of the country’s politburo published late Tuesday.

The media, released by the Korean Central News Agency, show Kim speaking to officials, approving measures to improve the country’s coronavirus response, and making preparations to prevent damage to crops as a typhoon approaches the country.

Just In: North Korea's state news agency runs photos of Kim Jong Un at a Workers' Party of Korea Executive Policy Council meeting that took place on Tuesday. For a chap in a coma, he's looking better than I expected. pic.twitter.com/BcgfetIPuh

Kim’s reappearance comes just days after an ex-official from South Korea reported that he was in a coma. Before that, South Korea’s National Intelligence Service reported that Kim had recently delegated some of his power to his sister Kim Yo-jong and other aides, leading to speculation that she had taken power. Other South Korean observers said the possible government shakeup may have been aimed at reforming the leadership to improve balance between the party, state and the military, rather than a signal of his loss of power.

The North Korean leader’s health has been the source of speculation for months, with Western and South Korean media suggesting that Kim may have undergone heart surgery, fallen ill, or even died. In May, after Kim appeared in public after disappearing for three weeks, some media claimed that he may have been replaced by a body double.

Kim’s ‘emergence from the dead’ and his sister's alleged plans to take over have since become the source of endless memes.

Kim Jong Un after dying for the 6th time this year: pic.twitter.com/jrHPqp5ph4

kim jong un coming back from the dead for the 4th time pic.twitter.com/3ES3T9TXGc

South Korean Intelligence Agency Claims Kim Jong-un Shares Power With His Sister
Typhoon Bavi is expected to make landfall in North Korea on Thursday, with the country already reeling from a host of issues including torrential flooding, US sanctions and a reduction in trade with China amid the closure of the country’s borders due to the coronavirus pandemic. Typhoon Bavi will hit North Korea just weeks before the country’s fall rice harvest is expected to start.

North Korea has yet to officially report any coronavirus cases, although Pyongyang recently reported that the virus “could be said to have entered” the country. In July, a possible case was reported in the city of Kaesong, leading authorities to introduce a three-week lockdown. The lockdown was lifted in early August. On August 5, the World Health Organization reported that test results for the suspected coronavirus case had proved inconclusive.

000000
Popular comments
...and the sheeple throughout the world continue stubbornly, and stupidly to have faith in the Fakestream media believing every crap thrown at them...