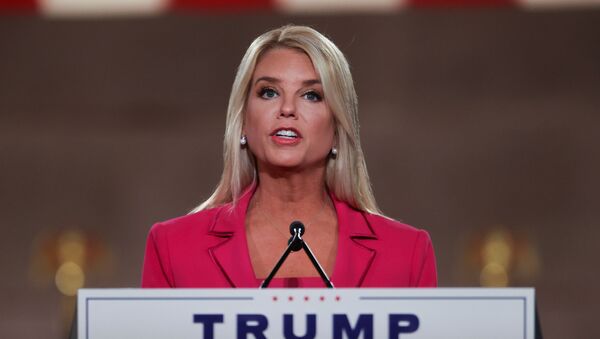 Andrei Dergalin
All materialsWrite to the author
The former Florida AG claimed that Joe Biden, the current Democratic Party candidate for the office of President of the United States, “has been writing the textbook on abuse of power for 40 years.”

US Democratic presidential candidate Joe Biden and his son Hunter have been dealt a fresh verbal blow courtesy of Pam Bondi, lobbyist and former Florida attorney general, who savaged them in her speech at the Republican National Convention (RNC).

During her address, Bondi, whom the New York Post describes as a "longtime ally" of US President Donald Trump, mounted a "prolonged attack" against Biden's son, branding him as corrupt over his role in a certain Ukrainian energy company - Burisma.

"A corrupt Ukrainian oligarch put Hunter on the board of his gas company even though he had no experience in Ukraine, or in the energy sector. None. Yet he was paid millions to do nothing", she declared, as quoted by the newspaper. "He only had one qualification that mattered. He was the son of the man in charge of distributing US aid to Ukraine."

Having mentioned Hunter's trip to China together with his father aboard Air Force Two in 2013 where the former "had meetings with his Chinese bank partners", as Bondi put it, she also went on to make some rather unflattering remarks about the current Democratic presidential candidate himself.

"For Joe Biden, it’s been the land of opportunism, not opportunity", she said, claiming that he "has been writing the textbook on abuse of power for 40 years."

Earlier at the RNC, which kicked off on 24 August in Charlotte, North Carolina, Donald Trump Jr has also berated Joe Biden over how taxation in the United States might be affected if the latter gets elected as president, and branding him as the "Loch Ness Monster of the swamp".

World
‘Joe, I Have Positive News For You’: Trump Retweets Alleged Audio of Biden-Poroshenko Phone Call

The first night of the convention also witnessed Donald Trump and Mike Pence being officially renominated as the 2020 Republican presidential and vice-presidential candidates, respectively.

Hunter Biden was hired by Burisma for its board of directors at a time when his father was in charge of Ukraine policy during the Obama administration. The Biden family denies any wrongdoing and insists that there's no evidence to back up claims about Hunter Biden’s $50,000-a-month no-show job at the company allegedly was a payoff in exchange for access to the Obama White House.