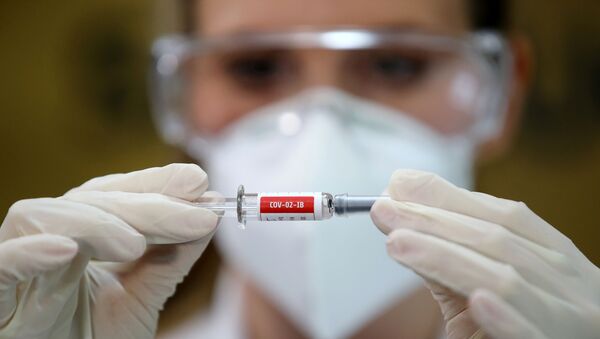 Demond Cureton
All materialsWrite to the author
The sharp comments come as Beijing faces several challenges in the ongoing US trade war on China. US officials have passed numerous executive orders and measures against Chinese officials and tech firms to block access to key technologies as well as business with American companies.

China should cut medicine and drug exports to the United States if Washington blocks Beijing's access to semiconductors, one of the mainland's top economists, Li Daokui told the South China Morning Post on Wednesday.

Despite Beijing not using medicines to pressure the US, the Chinese government could block access to some supplies in retaliation for Washington's trade war on Chinese tech firms, he said.

US firms heavily rely on medicines imported from Chinese companies, which US president Donald Trump and Democratic challenger Jo Biden plan to address amid chaos from the ongoing coronavirus pandemic, according to the SCMP.

Both candidates in the upcoming elections in November said they would move production of key medical supplies back to the US in a bid to reduce dependence on Chinese pharmaceuticals, the report added.

“For vitamins and antibiotics, more than 90 per cent of their raw materials are produced in China. The US will definitely not be able to produce them in the short term. Of course, we will not take the lead in doing this, but if the US dares to play dirty, we have these countermeasures,” Li Daokui told the SCMP.

US officials may further "suppress" Chinese firms like Huawei Technologies and others via sanctions but a full ban on chip suppliers would be a "nuclear option", the Tsinghua University finance professor said.

China should also prepare for a "very realistic" threat of its banks being cut from the SWIFT international banking system amid tensions over Hong Kong's national security law, he said, adding that such measures would be "economic terrorism".

“We are open to negotiations, but if you are unreasonable, we will fight you to the end at any cost,” he concluded.

The news comes as Beijing and Washington are set to discuss 'phase one' trade talks, which Prof Li said would be "an era of intense game playing", with the former set to raise concerns on Washington's trade war as well as Trump's forced sale of TikTok owner ByteDance to a US tech company such as Microsoft or Oracle, among others.

Trump's WeChat Ban Not an 'Effective' Answer But May 'Unfairly' Hit Chinese Firms in US - Techsperts
Relations between the major global economies have soured over numerous issues, including the Trump administration's move to block Huawei from US technologies, namely chips used in smartphones and computers, and add roughly 38 affiliates operating in 21 countries of the Chinese telecoms giant to the US Entity List.

President Trump also ordered ByteDance to cut a portion of the sale to the US Treasury, sparking backlash from the Chinese startup, who later launched a lawsuit against the US government.

The US Office of Foreign Assets Control also announced a fresh round of sanctions against the Xinjiang Production and Construction Corps (XPCC) and three officials in the Chinese conglomerate, citing alleged human rights abuses in the westernmost autonomous region.

But the move has forced Chinese authorities to pledge $1.4tn in investment into its mainland tech sector, namely via companies such as Shanghai-based Semiconductor Manufacturing International Corp (SMIC), in major push for self-sufficiency in producing domestic technologies, including processors, artificial intelligence, fintech and infrastructure.

000000
Popular comments
With US arrogance China has no choice but to play tit for tat...!

netman
26 August 2020, 18:54 GMT7
000000
"Despite Beijing not using medicines to pressure the US, the Chinese government could block access to some supplies in retaliation for Washington's trade war on Chinese tech firms, he said" its the only way your going to get the US attention, playing dirty is the only thing the US is good at..