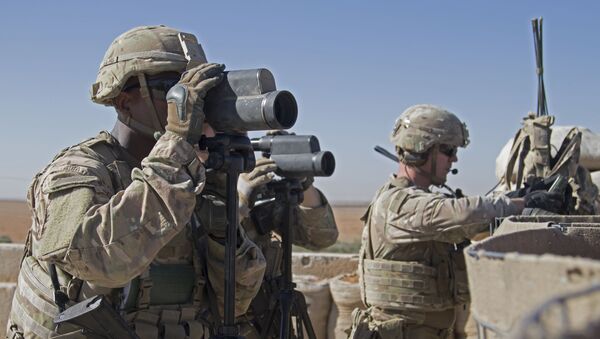 © AP Photo / Spc. Zoe Garbarino
Subscribe
Ekaterina Blinova
All materialsWrite to the author
Trouble is brewing for the US-led coalition forces, with unidentified groups sporadically attacking American outposts, convoys and bases over the past several months in northeastern Syria. Ghassan Kadi, a political analyst of Syrian descent, shed light on the emerging popular resistance against US-backed militants within the country.

On 20 August, prominent members of Arab tribes in the northeastern Syrian city of Aleppo and vowed to support a popular resistance against US troops and their 'proxies', the Syrian Democratic Forces (SDF), who have been maintaining illegal bases in the oil-rich regions of Eastern Syria.

Thursday's statement came on the heels of the Arab Al-Uqaydat tribal summit in Deir ez-Zor Governorate which held the US-led coalition responsible for murdering tribal sheikhs in the area. Syrian tribal leaders gave the US military and the SDF a month to pull out of the region.

Meanwhile, the number of sporadic attacks against American and allied SDF military installations and convoys on the ground is soaring. On August 18, three small Kaytusha rockets exploded near a US Conoco base in Deir ez-Zor Governorate.

"What we are seeing is probably the beginning of an uprising against the US-led foreign intervention," suggests Ghassan Kadi, a Middle East expert and political analyst of Syrian descent. "Don’t forget that people of the Al-Hasakah, Deir ez-Zor, Raqqa, and Qamishli governorates have suffered immensely under ISIS (ISIL/Daesh)* and fought to liberate themselves from it, only to find themselves under another occupation that is based on American hegemony that is looting their resources and preventing the supply chain of food and basic necessities from reaching them. Needless to mention the huge drop in the Syrian Lira, which is causing an enormous increase in the cost of living."

The political analyst believes that the "Arab tribal militia" is perhaps more accurate and descriptive than the other term that is sometimes used, namely, the "Popular Resistance of the Eastern Region" aka "Popular Resistance in Raqqa". The latter is a paramilitary group headquartered in the province of Raqqa.

"This is an organised group that was formed under a different name by Suleiman Al-Shwakh," Kadi explains. "Al-Shwakh was assassinated in Damascus in August 2019 and his murder remains unsolved. He was a Syrian War veteran who had fought in Aleppo and Palmyra."

Still, the emerging resistance movement in northeastern Syria appears to be bigger than that, the expert believes.

"The spontaneous demonstrations of citizens of the region who are blocking US military routes with their bare hands is a stark indication that those citizens do not have to belong to an organised group to show their anger at the presence of those troops," he underscores.

Meanwhile, the same day when three missiles struck near Conoco, a Russian military convoy returning from a humanitarian mission was hit by an improvised explosive device (IED) near the At-Taim oil field, about 15 km outside the city of Deir ez-Zor. The blast claimed the life of a Russian major-general and left two troops injured.

However, according to Kadi, if the IED that killed General Asapov was built and placed by a northeastern resistance group, "then this would mean that this was a tragic accident", as the emerging resistance in northeast is not anti-Russian.

In the aftermath of the deadly explosion, the Russian Investigative Committee opened a case over the death of the major general and the injury of the two soldiers. 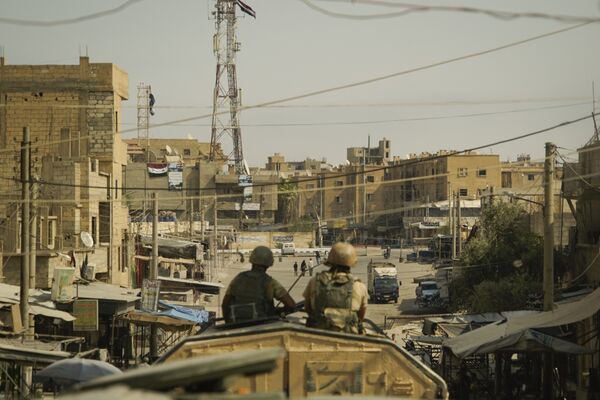 Trump Appears to be Lesser Evil for Syria Than Biden

"Whether the attacks on American and possibly SDF locations escalate into something bigger or not is anyone’s guess," the Middle East expert opines. "What does seem to be most likely is that they are not going to stop. History clearly shows that guerrilla warfare against occupiers can be effective and even if it remains sporadic, it almost invariably comes at a huge cost to the occupier. That said, my guess is that it will escalate."

One might wonder whether the anti-American resistance is being coordinated by some extraterritorial regional players. Responding to this question, Kadi notes that though the resistance, be it in under the wing of the organised Popular Resistance of the Eastern Region, tribal leaders or individuals, will take help from any sympathiser and supporter, as it is home-grown and grass-root in the first place.

"Sooner or later, American troops will have to leave Syria. They'll either choose to leave or the'll be forced to," he stresses.

Still it remains unclear how the US' Syria strategy will change after the 2020 elections and whether Donald Trump will deliver on his promise and withdraw American military personnel from the region if he wins in November.

"I believe that despite all the inexcusable and unforgivable atrocities of the Trump administration in Syria, and which include looting Syria’s oil, burning wheat crops, allowing Turkey to deprive the Al-Hasakah region from water for domestic use, just to name a few, Trump is the lesser evil", Kadi opines.

He does not rule out that the US incumbent president "was pushed to take actions he did not want to take and would rather withdraw".

"As for what a Joe Biden win can result into, with his weakness and diminishing mental faculties, he will most likely be a very pliable yes-man, putty in the hands of the deep state, its hawks, cronies, henchmen and beneficiaries," the analyst concludes.

000000
Popular comments
Don't tell me the ussa_msm will report Russians are paying people to attack their fascist troops in a sovergin nations lands. Illegal under international laws & also its illegally stealing the Syrian's oil.

GunZenBomZ
25 August 2020, 16:09 GMT10
000000
Once this NE Syrian chunk rejoins Syria again, then there will only be 1/3rd of Idlib left under turkish jihadi Al-Qaeda occupation. Russia and Iran need to get on the ball and evict these terrorists still occupying 25% of Syrian land
Ahson
25 August 2020, 17:41 GMT8
000000
Newsfeed
0
New firstOld first
loader
LIVE
Заголовок открываемого материала
Access to the chat has been blocked for violating the rules . You will be able to participate again through:∞. If you do not agree with the blocking, please use the feedback form
The discussion is closed. You can participate in the discussion within 24 hours after the publication of the article.
To participate in the discussion
log in or register
loader
Chats
Заголовок открываемого материала
Worldwide
InternationalEnglishEnglishMundoEspañolSpanish
Europe
DeutschlandDeutschGermanFranceFrançaisFrenchΕλλάδαΕλληνικάGreekItaliaItalianoItalianČeská republikaČeštinaCzechPolskaPolskiPolishСрбиjаСрпскиSerbianLatvijaLatviešuLatvianLietuvaLietuviųLithuanianMoldovaMoldoveneascăMoldavianБеларусьБеларускiBelarusian
Transcaucasia
ԱրմենիաՀայերենArmenianАҧсныАҧсышәалаAbkhazХуссар ИрыстонИронауОssetianსაქართველოქართულიGeorgianAzərbaycanАzərbaycancaAzerbaijani
Middle East
Sputnik عربيArabicArabicTürkiyeTürkçeTurkishSputnik ایرانPersianPersianSputnik افغانستانDariDari
Central Asia
ҚазақстанҚазақ тіліKazakhКыргызстанКыргызчаKyrgyzOʻzbekistonЎзбекчаUzbekТоҷикистонТоҷикӣTajik
East & Southeast Asia
Việt NamTiếng ViệtVietnamese日本日本語Japanese俄罗斯卫星通讯社中文（简体）Chinese (simplified)俄罗斯卫星通讯社中文（繁体）Chinese (traditional)
South America
BrasilPortuguêsPortuguese
NewsfeedBreaking
16:11 GMTResignation of US Special Envoy for Haiti Over Deportations 'Mischaracterised', State Dept. Suggests
15:44 GMTUS Health Official Wants to 'Blow-Dart' COVID Vax Into Black People in New Project Veritas Video
15:25 GMTTaliban Plans to Form Commission in 2022 to Draft New Constitution
15:22 GMTWatch Fuego Volcano Erupt in Guatemala, Spewing Out Vast Amounts of Smoke and Lava
15:17 GMTRussian Officials Assess Proposal to Populate Siberia With 'Resurrected' Woolly Mammoths
15:13 GMTParis to Bill Canberra for Cancellation of Submarine Deal After AUKUS Pact
14:51 GMT'Britney VS Spears': Pop Star's Fiancé Accuses Docu Makers of Earning Profit From Her Story
14:41 GMTRussian Union of Journalists Chief Slams 'Unacceptable' US Sanctions Against Colleagues
14:31 GMTUS Investment Firm Purchases Italy's Oldest Football Team
14:29 GMTUS to Find Ways to Get More Help to Haitian Migrants After US Envoy Resigned, State Dept. Says
14:25 GMTAnthony Joshua Says He Would ‘Fight King Kong' if He Had to as He Defends Titles Against Usyk
14:18 GMTFormer Nazi Helmut Oberlander Dies in Canada Before He Could Be Deported, Reports Say
14:07 GMTWhat's Behind Africa's Increasing Drive to Launch Satellites?
14:06 GMTExpo 2020 in Dubai Set to Boost Economic Development in Arab World, Organiser Says
13:58 GMTTwo Afghan Evacuees Charged With Sexual, Physical Assault in US, Justice Department Says
13:51 GMTBritish Government Preparing for 'Worst-Case Scenario' of Gas Prices, Says MP
13:43 GMTOutrage as Missouri High School Students Reportedly Come Up With Petition to Reinstate Slavery
13:42 GMTEC Does Not Expect Increase in Smartphone Prices Over Universal Charging Port Regulation
13:26 GMTAmericans Favour Trump Over Biden After Afghanistan Pullout Disaster, Poll Says
13:25 GMTComputer Game to Measure Children's Mental Development Launched by MSUPE