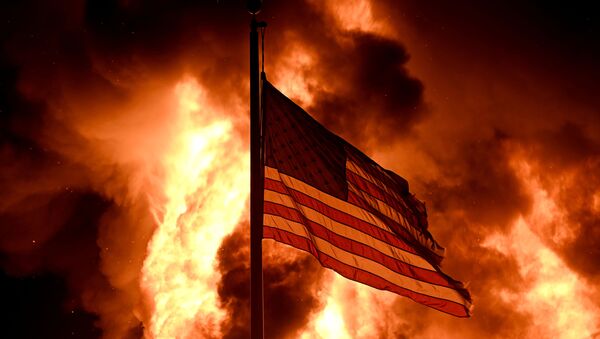 Kenosha became the latest US city to be swamped by protests after footage of the police shooting African American man Jacob Blake emerged on social media on Sunday.

The southeastern Wisconsin city of Kenosha braces for a third night of unrest as arsonists set fire to buildings and cars in the city, while rioters loot businesses in a predominantly black district, following the recent police shooting of Jacob Blake, an African American man.

Even though Blake survived, he is now paralysed from the waist down after being repeatedly shot in the back on Sunday.

The shooting is under investigation by the Wisconsin Department of Justice, but has angered people who have taken to the streets of Kenosha, torching vehicles, smashing windows and clashing with officers, forcing police to use tear gas against them.

Multiple videos showing the trail of destruction left by rioters and arsonists have gone viral on social media:

Mob rule is not justice.

This cannot be allowed to continue across the country.pic.twitter.com/5QSLzSvogc

KENOSHA: #BLM rioters burned down the youth correctional facility with the help of black bloc Antifa

​Protests have engulfed the United States since late May after African-American man George Floyd died shortly after a police officer in the state of Minneapolis knelt on his neck for over eight minutes while Floyd laid on the ground, handcuffed and pleading for his life, saying that he could not breathe. The protests were followed by riots, arson, and looting across the United States as people held demonstrations against police brutality and even called for the police to be defunded.