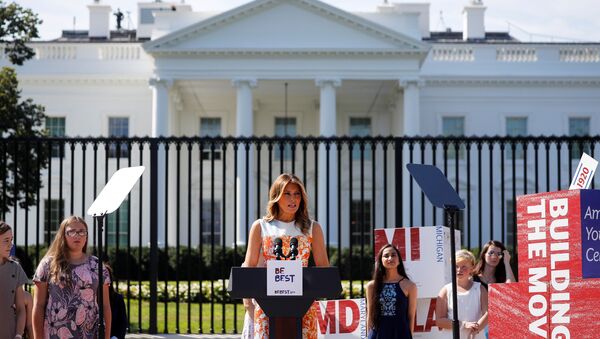 The US first lady, Melania Trump, is set to give Tuesday's highlight speech at the Republican National Convention. This comes 4 years after she was heavily criticised for plagiarising parts of her address from her predecessor, Michelle Obama.

A representative of the US first lady, Melania Trump, asserted on Tuesday that “every word” of her address to the Republican National Convention (RNC) will be her own.

Stephanie Grisham, who serves as Melania Trump's press secretary, told MSNBC that it is "very, very clear that over the last three and a half years, Mrs. Trump has done nothing but learn and grow in this role and she’s been doing a fantastic job at that".

"We have been working really hard the last three weeks. I can tell you that every word in the speech is from her. It’s very authentic and it’s going to come from the heart”, Grisham said.

Grisham said it will be one of Melania Trump’s longer addresses, describing the content as “positive and uplifting" and will include a highlight of her “Be Best” anti-bullying campaign.

This came as a response to a question surrounding accusations of plagiarism against Melania Trump in 2016, due to a part of her convention address closely resembling a speech by former first lady Michelle Obama in 2009.

“I would say it’s very forward-looking. She definitely lays out some of the things she wants to do with Be Best in the next four years”, Grisham added.

@FLOTUS cheats like her cheating husband @POTUS , but hey plagiarism in the Trump family is like everyone sitting around and reading the night before Christmas pic.twitter.com/tA0wAaGOKj

​The first lady is set to give the Tuesday keynote address on the second evening of the RNC event on Tuesday. Melania Trump will give her speech from the White House Rose Garden - recently renovated at her behest.

US President Donald Trump, Vice President Mike Pence and his wife Karen Pence, will be in attendance. According to Trump campaign communications director Tim Murtaugh, a small live audience is due to precautionary measures taken amid the coronavirus pandemic.

The audience of about 50 people will also include other family members, friends, and those associated with the Be Best anti-bullying campaign, Grisham confirmed.

An employee of the Trump Organization, Meridith McIver, acknowledged in 2016 that phrases of Michelle Obama’s speech had been included in the final draft of Melania's. She offered to resign but her offer was rejected by the Trumps.