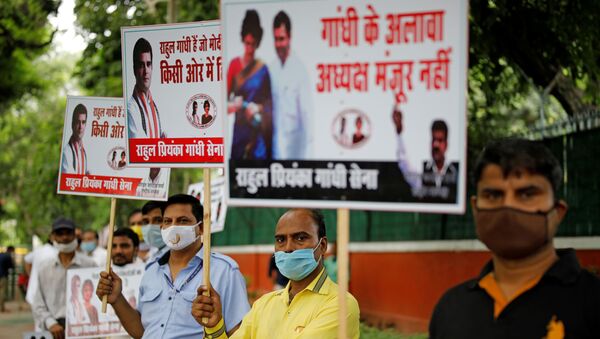 Discussing the dissent among key Congress members seeking sweeping changes in the party, Jha told Sputnik on Tuesday: “The Congress Party faces an existential crisis, it has been removed from the national political narrative in the last two Lok Sabha elections (parliamentary elections), and the public is disillusioned with Congress because they do not find the leadership inspirational.”

Jha was suspended last month for “anti-party activities and breach of discipline”, apparently for supporting the former Deputy Chief of Rajasthan Sachin Pilot, who had plotted a revolt against the party's leadership.

Leadership Crisis in India’s Congress Party Unresolved, Sonia Gandhi Remains in Place
In a letter to Sonia Gandhi, the Interim President of Congress Party, the dissenting Congress members had pointed out that the party had lost its support base and the confidence of the youth, as reflected in two successive overwhelming victories of its rival, Modi's Bharatiya Janata Party (BJP), during 2014 and 2019 parliamentary elections.

Jha said that while they (the Congress Working Committee) talked about the fact that there is a need for change, “there was a reluctance to change that was very apparent”.

He said this would cause “further disenchantment among the Congress workers” because the letter written by the 23 people highlights the serious problems the Congress Party faces.

“Instead of debating those issues, or saying what the timeline for implementing them is, we were wasting time on who wrote it, if it was the right time, etc,” Jha said.

The former spokesperson said the Congress Working Committee (CWC) was packed with nominated members and there had been no elections since 1997. He lamented that the CWC meeting held on Monday (24 August), therefore, went along predictable lines.

Jha felt there was no denying the fact that “the age of entitlement in politics has come to an end”.

“They have no objection to political parties led by the family. That is not the problem. The problem is, people do not want to see a perpetuation of the fact that the performance of the person should match the expectations,” Jha said, referring to the party leadership revolving around Sonia Gandhi and her son Rahul Gandhi.

Jha explained that the Congress party has a Constitution which mandates a transparent election process. He said that while the BJP had had six presidents in last 20 years, Congress had only two – Sonia Gandhi, who remained President of the party for 18 years, and the rest of the time, when the party was led by her son Rahul Gandhi.

“There is an inconsistency and we cannot live in denial of the fact that we have destroyed the internal democracy of the party,” he rued.

On the other hand, Rashid Kidwai, an author and political commentator said whatever support the Congress party has been receiving so far, was for the Gandhis, and there was near unanimity that Gandhis should continue to shoulder the leadership. He added that these very leaders insisted a reluctant Sonia Gandhi or Rahul Gandhi take over the mantle.

“The Gandhis have a deep sense of hurt, because they did not want to be part of politics – Rajiv Gandhi didn’t want to enter politics, Sonia Gandhi also didn’t want to be part of politics. After Rajiv Gandhi was killed, within 18 hours the Congress Working Committee passed a resolution; the same Ghulam Nabi Azad and Pranab Mukherjee approached Sonia and wanted to take over the leadership,” explained Kidwai.

Ghulam Nabi Azad, the leader of the Congress Party in the Rajya Sabha, the upper house of Indian Parliament, was among the 23 signatories of the dissenting letter which demanded a leadership change.

Kidwai, who has authored a biography of Sonia Gandhi and several other books on contemporary politics, commented that there were three types of people among those who sought a change of leadership.

The author said one group genuinely feels about Congress. “There is another set, who are opposed to Rahul Gandhi’s style of functioning and they are not very comfortable.”

Kidwai said whenever there is a regime change, people who are 'courtiers' also change. They all were looking for posts and positions. According to Kidwai, there is a third group of people, who want to damage the party internally.

“As you know, there were a lot of defections recently, people moved from Congress to BJP. It is the mix of these three. The problem for the Gandhis is how to deal with it,” Kidwai explained.

Kidwai dismissed prophecies that the Congress was finished after the 2014 general elections, when the BJP wrestled power with a thumping majority. He reminded that Congress did reasonably well in elections to state legislatures in Prime Minister Narendra Modi’s home state of Gujarat, as well as Karnataka, Madhya Pradesh, Rajasthan, Chhattisgarh, Jharkhand, and Maharashtra.

The CWC, met on Monday to consider the letter written by “certain leaders to the Congress President” but did not consider the contents of it.

The core decision-making body “unanimously requested Sonia Gandhi to continue to lead party, until a meeting of the larger body, the All-Indian Congress Committee, is held.”

Referring to the letter, the resolution noted that “no one will be and can be permitted to undermine or weaken the party or its leadership at this juncture.” It said “inner party issues cannot be deliberated through the media or public fora.”