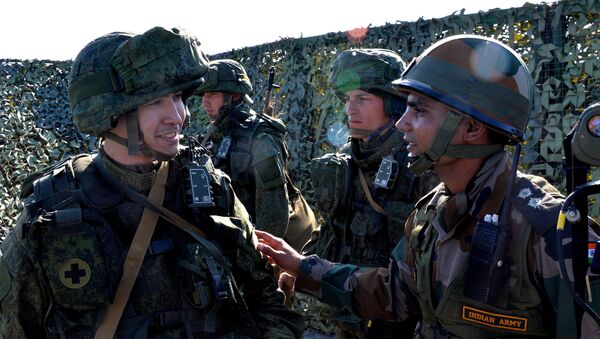 New Delhi (Sputnik): Russia is set to host at least 18 countries, including member-states of the Shanghai Cooperation Organisation (SCO) for the bilateral and multilateral military exercises that were delayed due to the coronavirus pandemic. The participating nations will have to follow COVID-19 protocols during their stay.

Despite border hostilities and soured relations, the militaries of India, China, and Pakistan will come together in Russia to participate in combat exercises in September.

The major exercise to assess the war readiness of the armies along with the Russian armed forces, "Kavkaz 2020" ("Caucasus 2020"), will be held from 15 to 26 September in Astrakhan, southern Russia.

India’ tri-services contingent of around 200 personnel, including Naval, Air Force, Air defence and Special Forces officers will take part in the drills along with the militaries of China, Pakistan, and Russia.

The exercises came amid India’s strained relations with China along the Line of Actual Control (LAC) in eastern Ladakh region. In the worst skirmishes between India and China in nearly 50 years, the Indian Army lost 20 soldiers during a violent clash with the Chinese army on the intervening night of 15-16 June.

The Indian and Chinese military contingents marched at the Victory Day Parade at Red Square in Moscow on the 75th anniversary of World War II. The parade, attended by Indian Defence Minister Rajnath Singh, was also joined by China’s People’s Liberation army.