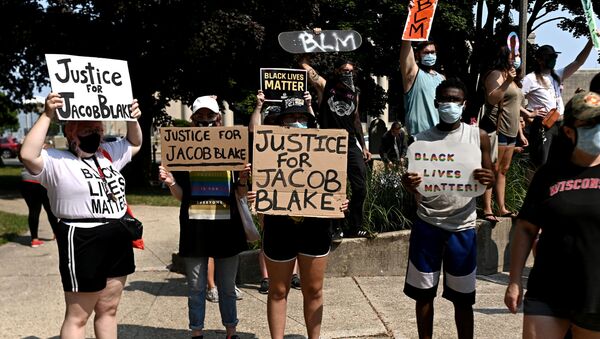 WASHINGTON (Sputnik) – African American man Jacob Blake is now paralysed after being shot by police in the US state of Wisconsin, his father told the Chicago Sun-Times on Tuesday.

Blake’s father said his son now has “eight holes” in his body and is paralyzed from the waist down, the Chicago Sun-Times reported. Doctors currently do not know whether the injury is permanent or they will be able to treat it, the newspaper added.

“I want to put my hand on my son’s cheek and kiss him on his forehead, and then I’ll be OK,” Blake’s father said. “I’ll kiss him with my mask. The first thing I want to do is touch my son.”

Blake was shot eight times in Kenosha, Wisconsin on Sunday in front of three of his children after police arrived at a scene in which he was trying to break up a fight between two women.

Videos: Demonstrators Demand Police Reform, Take to Washington, DC, Streets After Wisconsin Shooting
Angered residents have taken to the streets of Kenosha and other cities across the country following news of the shooting. Rioters in Kenosha torched and vandalised local businesses overnight.

Wisconsin Governor Tony Evers said in a statement on Monday that he has authorised the deployment of National Guard troops to the city.

Months-long protests erupted in the United States in May after African-American man George Floyd died when a police officer in the state of Minneapolis put him in a neck restraint. Some of the protests turned into violent riots with looting and clashes with law enforcement.