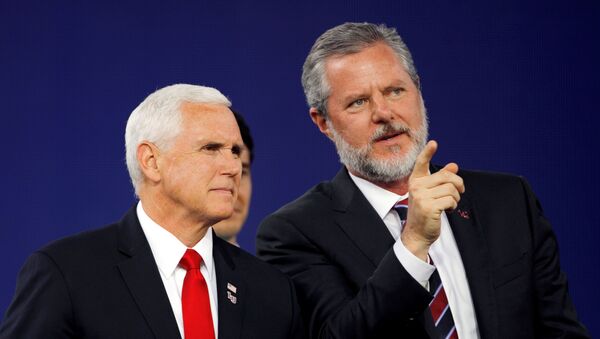 © REUTERS / Jonathan Drake
Subscribe
Jerry Falwell Jr. dispelled reports on Monday evening that he had submitted his resignation as president from the evangelical Christian Liberty University founded by his father.

Earlier on Monday, several reports citing sources in the university's senior administration claimed that Falwell had submitted his resignation as president of Liberty University.However, Virginia Business reported Monday evening that Falwell had dispelled those rumors, calling them "completely false."

Falwell was asked to take a leave of absence earlier this month after photos of him emerged showing him engaged in activities that did not conform to the values he preached at the evangelical university. Then on Monday, Reuters published a story detailing how he and his wife, Becky, had a three-way sexual relationship with a man for many years.

According to the report, Jerry would watch his wife have sex with a Miami, Florida, pool attendant named Giancarlo Granda, who later became Falwell's business associate.

Falwell's father, Jerry Falwell Sr., founded Liberty University in Lynchburg, Virginia, in 1971 based on his principles as a Southern Baptist minister. The school, which has an enrollment of more than 100,000 students, maintains very strict morality rules that result in the general separation of men and women and forbids sexual relations "outside of a biblically ordained marriage between a natural-born man and a natural-born woman." When his father died in 2007, Falwell Jr. took over the university.