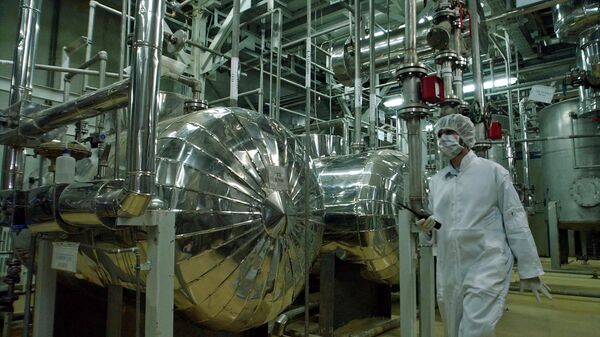 Last week, US Secretary of State Mike Pompeo sent a letter to the UN Security Council requesting that it invoke the 2015 nuclear agreement snapback mechanism under Resolution 2231, citing Iran's non-compliance with the accord. Zarif, in turn, sent a letter to the UNSC calling on the members to prevent Washington from attempting to reimpose UN sanctions against Iran because it is no longer a participant of the 2015 nuclear deal.

"During a telephone conversation this afternoon, the Iranian and French foreign ministers discussed bilateral relations, and the recent developments related to the Joint Comprehensive Plan of Action, as well as to the situation in Lebanon [after the Beirut blast]," the ministry said in a statement on Monday.

Earlier in August, Washington announced its plans to trigger the snapback mechanism to reimpose all the UN sanctions against Iran, which were previously lifted under the JCPOA, after failing to get the UN Security Council to pass a resolution aiming to indefinitely extend the arms UN embargo on Iran, before it expires in October. Zarif has said that Washington’s move to trigger snapback sanctions linked to the agreement was "illegal."

The JCPOA, signed in 2015 by Iran, China, France, Germany, Russia, the United Kingdom, the United States and the European Union, stipulates the removal of international sanctions from Tehran in exchange for it scaling down its nuclear program and ensuring it is peaceful. The deal was then enshrined in UNSC Resolution 2231, including a provision on a five-year arms embargo.

The United States unilaterally abandoned the agreement in May of 2018.