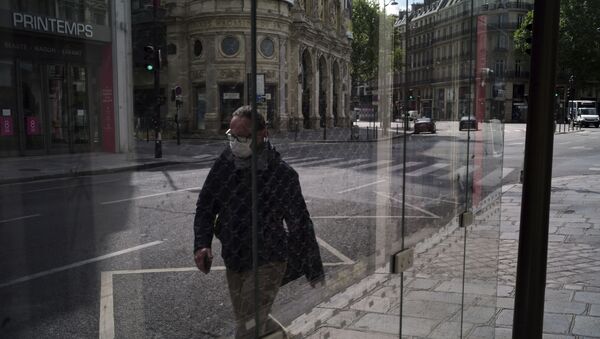 Subscribe
The death toll from the coronavirus infection in the world has topped 808,000; over 23.4 million cases of the infection were detected, and almost 15 million of those patients were cured, according to Baltimore, Maryland's Johns Hopkins University, which tracks and compiles data from national and local authorities, the media and other sources.

More than 23,000 new coronavirus cases were confirmed in Brazil in the past 24 hours, bringing the total number of confirmed COVID-19 cases in the country to over 3.6 million, according to the latest data from the Health Ministry.

BEIJING (Sputnik) - China has registered, over the past 24 hours, 14 cases of the novel coronavirus disease (COVID-19) and 16 asymptomatic carriers, 36 patients have been discharged from hospitals, the country's state health committee said in a statement.

All 14 new cases were imported.

SEOUL (Sputnik) - The South Korean authorities are switching all schools and kindergartens in Seoul and the country’s central regions to online classes until 11 September amid a new spike in coronavirus cases, Education Minister Yoo Eun-hae has announced.

In the past two weeks, the daily increase of coronavirus cases in South Korea grew proportionately from 56 to 332, reaching a record 397 cases on Sunday. The last time that a greater daily increase was reported was on 7 March, when 483 new cases were confirmed in South Korea over a 24-hour period.

According to Yoo Eun-hae, between 11 August and 23 August over 190 coronavirus cases were registered among students and teachers, which account for 76 percent of the total number of infections confirmed at South Korean schools since classes have resumed.

The South Korean Education Minister said at a press briefing on Tuesday that starting from Wednesday, 26 August, and up until 11 September, kindergartens, elementary, middle and high schools in Seoul, as well as in the provinces of Gyeonggi and Incheon and other central regions are switching to the online format.

High School students who are getting ready for applying to universities will be able to attend classes in person if it is absolutely necessary, Yoo Eun-hae said. All students will have to observe social distancing rules and wear face masks. Classes could also be allowed at special schools where the number of students does not exceed 60 people, as well as at village schools.

Special social services will help parents who have handicapped children or have nobody to leave their children with amid the closure of kindergartens and schools.

68 percent of registered voters who responded to a survey approved Trump's executive orders while 32 percent disapproved, the poll figures published by The Hill showed on Tuesday.

Trump took executive action after US lawmakers failed to reach a deal on another COVID-19 relief bill.

BUENOS AIRES (Sputnik) - The number of confirmed cases of the novel coronavirus disease (COVID-19) in Peru has risen by 1,724 over the past 24 hours to surpass 600,000, the country's Health Ministry said.

More than 3 million coronavirus tests have been taken in the country, whose COVID-19 death toll is 27,813 people.

The World Health Organization (WHO) declared the outbreak of the new coronavirus a pandemic on 11 March.

MOSCOW (Sputnik) - More than 17,000 new coronavirus cases were confirmed in Brazil in the past 24 hours, in that same period over 560 new deaths from COVID-19 were registered, according to the latest data from the Health Ministry.

Over 2.7 million people have recovered from COVID-19 in Brazil.

The Gaza Strip has registered four coronavirus (COVID-19) infection cases outside quarantined areas within the region.

The Government Media and Information Center in the Gaza Strip announced during a Monday press conference that infections occurred inside the Maghazi camp in the middle of the Gaza Strip.

Health officials said that all four of those infected are from a single family.

ROME (Sputnik) - The president of Italy’s Sicily, Nello Musumeci, on Monday set himself on a collision course with the central government over orders to disband migrant camps on the island over coronavirus fears.

In an order issued by Musumeci last week, all asylum-seekers on the island must be transferred to other areas and migrant centres must be closed down. The order also issues a blanket ban on all maritime vessels carrying asylum-seekers from docking in the island’s ports.

"Rather than responding to the migration emergency with concrete action, the central government is setting up concentration camps - abandoned tent cities in a military depot for years," Musumeci told a news conference on Monday.

The polemic politician argued that with 58 new cases of COVID-19 registered among the tightly-packed migrant population in Sicily poses a risk for a resurgence of the disease. He stressed that the order was issued on health grounds, rather than anti-immigrant sentiments.

The Italian Interior Ministry, for its part, has said that the order is inconsistent with the competences of the local authorities and that the demands are unfeasible.

In a statement issued on the matter, the ministry said that it was doing its utmost to ease the migration pressure on Sicily, noting that over 3,500 asylum-seekers have been transferred off the island over the past month. Rome also said that all migrants are subjected to COVID-19 tests on a regular basis.

According to the Interior Ministry’s data, some 17,000 asylum-seekers have made landfall of Italian shores since the beginning of the year. This is sharply higher than the 4,600 that arrived in 2019 and looks to eclipse 2018’s year-long tally of 19,500 arriving migrants.

Belarus Will Become the First Country to Receive Russian COVID-19 Vaccine
13:23 GMT 24.08.2020
Putin, Netanyahu Express Support for Development of Cooperation to Combat COVID-19, Including Clinical Trials and Vaccine Production
11:59 GMT 24.08.2020
First Confirmed Case of COVID-19 Reinfection May Have Been Registered in Hong Kong

Reports about a Hong Kong resident being reinfected with the novel coronavirus may be the first documented case of that happening, Maria Van Kerkhove, the head of the emerging diseases unit of the World Health Organization (WHO), said on Monday, advising caution.

"There have been more than 24 million cases reported to date, and we need to look at something like this on a population level. And so it's very important that we document this in countries that can do this, where sequencing can be done, that would be very very helpful. But we need to not jump to any conclusions, even if this is the first documented case of reinfection. It is possible, of course, because with our experience with other human coronaviruses — the MERS coronavirus and the SARS CoV-1 coronavirus — we know that people have antibody response for some time, but it may wane," van Kerkhove told a virtual briefing.

Earlier in the month, a 33-year old Hong Kong citizen was reported to have caught the disease once again during a trip to Europe despite having already had the disease approximately four months prior.

France's junior minister for European affairs, Clement Beaune, said that French authorities will reciprocate in the coming days following the UK's decision to introduce a 14-day quarantine for all arrivals from France.

The UK said on Friday that travellers from the United Kingdom to France must self-certify that they are not suffering from coronavirus symptoms and haven't been in contact with a confirmed case within 14 days of travel.

The World Health Organization (WHO) began talks about the Russian coronavirus vaccine with the country's authorities and believes that the Phase III clinical trials will be the real test of efficacy, WHO Chief Scientist. Soumya Swaminathan, told reporters.

"We have started discussion with the authorities in Russia to learn more about the vaccine candidate and we have requested the data on efficacy and safety. We understand that it has gone through some preliminary human trials and it is about to get into a phase three clinical trial, which will really be the test of efficacy," Swaminathan said.

"So we look forward to discussing the with the Russian authorities as well as seeing the data that is available so far and then having a dialogue on what the further needs should be and how further studies would need to be done," the chief scientist added.

According to the Yonhap news agency, the highest level of social distancing is inevitable if people do not conform to the current level rules.

"If we fail to stop (the virus spread) at this stage, we will have to elevate the social distancing (guidelines) to the third one," Moon said, as quoted by the media outlet.

According to the president, with many jobs lost, this would lead to a "huge economic blow."

"And even the medical (service) system may collapse," Moon added, calling on the public to avoid the "worst situation."

Seo Jeong-hyup, the acting mayor of Seoul, said on Sunday that the city residents would be required to wear masks in public places starting Monday.

All social gatherings and group meetings with more than 10 participants have been banned in Seoul until the end of this month over an increasing number of infected people.

Russia registered 4,744 new cases of the coronavirus, which brings the cumulative total to 961,493, the response center told reporters on Monday.

Germany confirmed 711 new COVID-19 cases and three new coronavirus-related deaths over the past 24-hour period, according to the Robert Koch Institute, which is responsible for disease control and prevention in Germany.

The total number of confirmed coronavirus cases in Germany now stands at 233,575. The country’s total COVID-19 death toll is 9,272, according to the latest data from the Robert Koch Institute.

The Robert Koch Institute warns that there has been an increase in COVID-19 case numbers in many federal states in Germany in the past weeks, while the average age of infected individuals has been decreasing.

More than 400 Russians, including 11 infants, have boarded a repatriation flight from the United States that Russia has organized amid the coronavirus pandemic, Russian Ambassador Anatoly Antonov said.

"Today, 411 people are coming back to Russia from the US, there are 11 infants among them. Just minutes ago the plane left the John F. Kennedy airport in New York. Tomorrow our compatriots, who had been stuck in the United States at such a difficult time, will be home," Antonov said answering questions from reporters, released on the Russian Embassy's Facebook page.

According to the ambassador, a total of over 7,000 Russians have been able to return home from the US amid the pandemic thanks to the repatriation flights.

"Today, there are 31 Russians on board the plane who were in need of urgent repatriation," Antonov told reporters, specifying that the passengers on board the flight from the so-called "humanitarian list" are mostly handicapped individuals and elderly people.

000000
Popular comments
games are played and people simply accept these lies, globalists in London and Paris are the same, and are further training their peasants to behave like obedient sheeple. The globalists, Rockefeller Rothschild Bilderberg group and their illegitimate child, rootless cosmopolitan Jewish Israel, are laughing all the way to their central banks, which they own or control.