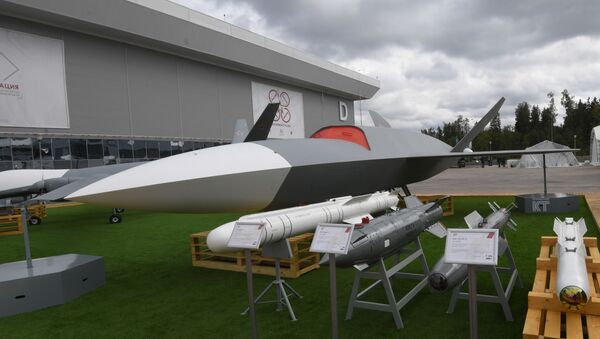 Ilya Tsukanov
All materialsWrite to the author
Several new Russian drone designs were presented at the ongoing ARMY-2020 arms expo outside Moscow this week.

The Grom, which made its debut at ARMY-2020, is designed to provide support for the Sukhoi Su-35 and Sukhoi Su-57 fighter jets, Nikolai Dolzhnekov, general designer at Kronstadt Group, told Sputnik.

The UAV weighs about 7 tonnes, and has a 500 kg payload, with its main mission being to help keep pilots and their aircraft safe by providing support in the destruction of enemy air defences, and in carrying out other combat operations.

“Even today, the Defence Ministry understands that drones of this type should enter into service with the Aerospace Forces en masse,” Dolzhnekov said. 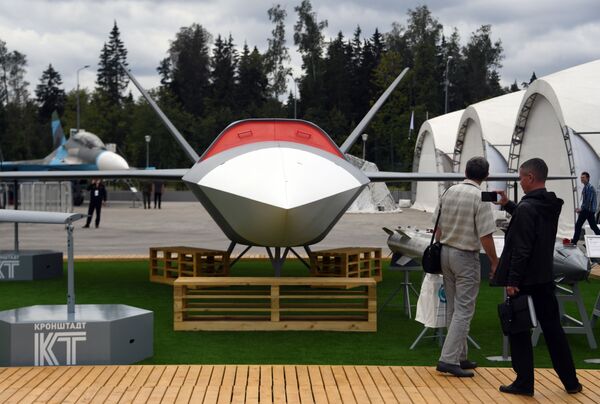 The Grom drone featured at the ARMY-2020 arms expo outside Moscow.
© Sputnik / Grigory Sysoev
/
Go to the photo bank

Russian developers aren’t the only ones working on UAVs to serve as autonomous teammates for manned aircraft in combat operations. The United States, the United Kingdom and other countries are known to be working on pairing fighter jets with swarms of drones to carry out coordinated combat missions, with the technology expected to appear either with sixth-generation fighter jets or upgraded fifth-gen aircraft.

Another Russian drone making its debut at ARMY-2020 is the Helios, its name a reference to the Greek sun god. This drone is equipped to handle radar surveillance and assist in guidance.

“The Helios is a five-tonne radar surveillance and guidance drone. When used as a radar, it will most likely be fitted with part of the radar station used in the Beriev A-100 ‘Premier’ [early warning and control aircraft],” Dolzhnekov explained. 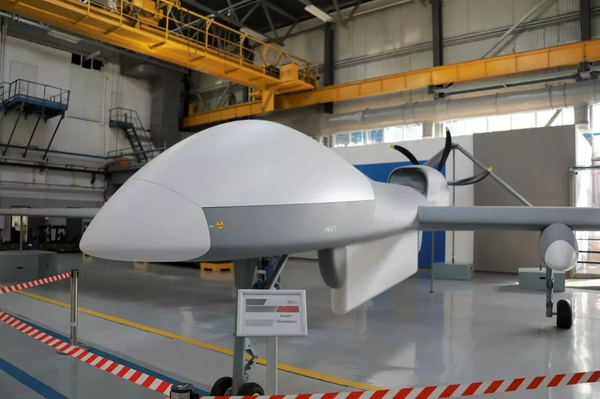 The chief designer said that while the defence ministry has not signed a contract for the delivery of the Helios to the military, the command of both the Aerospace Forces and of Russian naval aviation have expressed great interest in the prospective UAV.

Maj. Gen. Andrei Goncharov, chief of the Main Directorate of Research Activities and Technological Support of Advanced Technologies with the Russian Defence Ministry, says the Helios features improved capabilities compared to its predecessors, including in terms of increased range and flight time. The officer said that as was the case with the Orion, another UAV by Kronstadt Group, the Helios features the widespread use of composite materials.

Kronstadt Group is also working on another drone platform, the Sirius, a two-tonne upgrade of the Orion, with plans to build a flight-capable demonstrator by 2021. The Sirius is expected to have a satellite communications complex aboard, allowing it to be operated “at almost unlimited range,” according to Dolzhnekov, and will have capabilities for use in both reconnaissance and combat missions. 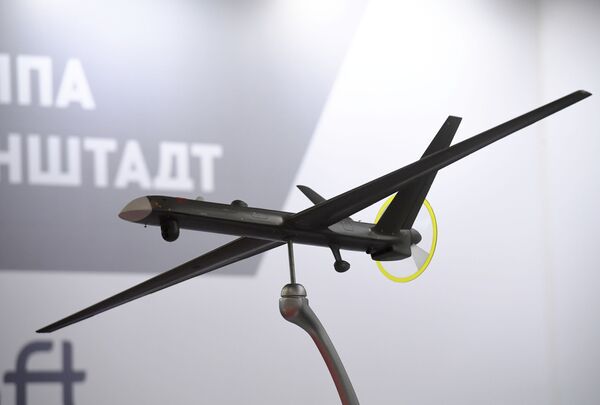 Kronstadt isn’t the only Russian company developing new drones. Alexander Smirnov, general director of the Splav, the Russian rocket artillery and missile maker, told reporters at ARMY-2020 that its engineers are carrying out field testing an artillery projectile which can launch a small drone.

Meanwhile, ZALA Aero, an Izhevsk-based UAV developer and subsidiary of Kalashnikov Concern, presented its own unique drone complex at ARMY-2020. The drone, known as the ZALA 421-16EV, features a tiltrotor design enabling for vertical take-off and landing.

The platform is said to be ideal for missions including surveillance and aerial photography in difficult-to-reach areas, as it doesn’t require a runway. The drone is said to have a cruising speed of up to 110 km/h, an airborne time of 2 hours, an onboard computer for the recording and streaming of multiple channels of Full HD video, and automatic target tracking, along with an encrypted hard drive.

Together with the prospective drones presented at ARMY-2020, Russia has several other drones under development, including the 6-tonne Altius-U reconnaissance drone, and the stealthy 20+ tonne flying wing Okhotnik (‘Hunter’), which is believed to have a weapons payload of up to 2.8 tonnes. Flight testing of both drones began last year.