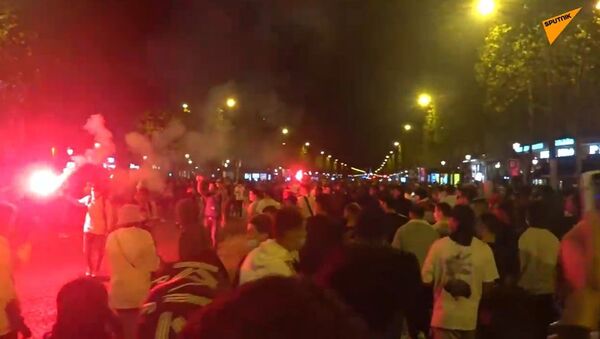 On Sunday night, hundreds of football fans accumulated on the avenue of Champs-Elysees, where mass gatherings are prohibited amid the coronavirus pandemic. Social distancing guidelines were impossible to observe because of the large number of people, according to a Sputnik correspondent.

​After the Champions League final ended, with French footballer Kingsley Coman (who was trained at Paris Saint-Germain's academy) scoring the decisive lone goal, football fans started to burn flares and firecrackers. Police then used tear gas to disperse the crowds.

The Paris Police Prefecture said on Twitter in the early hours of Monday that all the people who had gathered on Champs-Elysees had been dispersed and traffic had been restored.

At 01:00 a.m. (23:00 GMT on Sunday), the Paris Police Prefecture said on Twitter that starting from that point, all people gathering in the Champs-Elysees area would be fined.

A Sputnik correspondent reported that several bus stops were damaged on streets adjacent to Champs-Elysees, particularly on Hoche Avenue, and that football fans had set trash cans on fire.

Sunday night was a sixth time that Bayern won the UEFA (Union of European Football Association) Champions League, the previous win was in 2013.