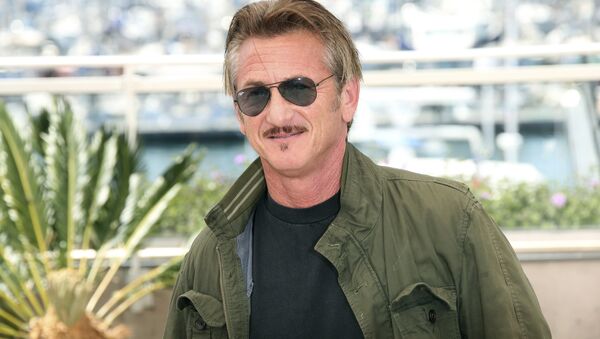 © AP Photo / Joel Ryan
Subscribe
Andrei Dergalin
All materialsWrite to the author
As Penn suggested, the United States is capable of testing all of its citizens for COVID-19 “twice a week”.

The ongoing efforts of the Trump administration to tackle the coronavirus pandemic in the country have been criticized by Sean Penn, American actor and founder of an organization called Community Organized Relief Effort (CORE) which, as The Hill points out, "has partnered with community groups and local governments to administer over a million COVID-19 tests".

During an interview with CNN host Ana Cabrera, when she mentioned "coronavirus testing czar" Admiral Brett Giroir saying that the administration is doing "everything that we can do" to increase testing capacity in the country, and asked Penn if he has any advice to give "about improvements that need to be made", the latter had some rather unpleasant things to say.

Sean Penn: "I don't have faith in giving advice to the White House testing czar or to the president of the United States -- the former is a flat-out liar and an incompetent pawn." pic.twitter.com/Tksmyl7wQi

​"I don't have faith in giving advice to the White House testing czar or to the President of the United States. The former is a flat-out liar and an incompetent pawn," Penn simply said. "I'm telling you this not as a Democrat or a lefty. I'm telling you this as somebody who sees it every day".

He also insisted that the United States is capable of "testing all of its citizens twice a week", stressing the importance of testing, notification and a contact tracing period to occur in five days, as otherwise it becomes "useless".

Quite a few social media users, however, seemed more focused on Penn's appearance than on what he had to say, with some dropping joking references to his previous works.

When did Spicolli become such a bore?

000000
Popular comments
Isn't it a bad flu, if it quacks like a duck, swims like a duck and looks like a duck, well it' a duck. The number is the hospitalisation not the tested infected.
Mystere
23 August 2020, 22:17 GMT1
000000
You have a real valid point here, TruePatriot. Aha, so Sean Penn's taken responsibility for the massive increase in "cases" then, eh? That's all the flaky tests do - inflate the numbers because a dubious positive test counts as a case (duh), among other things, while the truth of the matter is that the cold/flu bug's over with and cases are falling to zero. Anyway, Penn's no physician, virologist, or epidemiologist; so, how can he take such responsibility? He looks like someone the cat dragged in.
Legolas Greenleaf
25 August 2020, 23:12 GMT
000000
Newsfeed
0
New firstOld first
loader
LIVE
Заголовок открываемого материала
Access to the chat has been blocked for violating the rules . You will be able to participate again through:∞. If you do not agree with the blocking, please use the feedback form
The discussion is closed. You can participate in the discussion within 24 hours after the publication of the article.
To participate in the discussion
log in or register
loader
Chats
Заголовок открываемого материала
Worldwide
InternationalEnglishEnglishMundoEspañolSpanish
Europe
DeutschlandDeutschGermanFranceFrançaisFrenchΕλλάδαΕλληνικάGreekItaliaItalianoItalianČeská republikaČeštinaCzechPolskaPolskiPolishСрбиjаСрпскиSerbianLatvijaLatviešuLatvianLietuvaLietuviųLithuanianMoldovaMoldoveneascăMoldavianБеларусьБеларускiBelarusian
Transcaucasia
ԱրմենիաՀայերենArmenianАҧсныАҧсышәалаAbkhazХуссар ИрыстонИронауОssetianსაქართველოქართულიGeorgianAzərbaycanАzərbaycancaAzerbaijani
Middle East
Sputnik عربيArabicArabicTürkiyeTürkçeTurkishSputnik ایرانPersianPersianSputnik افغانستانDariDari
Central Asia
ҚазақстанҚазақ тіліKazakhКыргызстанКыргызчаKyrgyzOʻzbekistonЎзбекчаUzbekТоҷикистонТоҷикӣTajik
East & Southeast Asia
Việt NamTiếng ViệtVietnamese日本日本語Japanese俄罗斯卫星通讯社中文（简体）Chinese (simplified)俄罗斯卫星通讯社中文（繁体）Chinese (traditional)
South America
BrasilPortuguêsPortuguese
NewsfeedBreaking
18:57 GMTUnbelievably Slow Hypersonic Bureaucracy
18:47 GMTIran Expected to Become Member of Shanghai Cooperation Organisation Led by Russia, China
18:19 GMTEx-Officer Chauvin Pleads Not Guilty in Police Brutality Case Involving Teen
18:17 GMTUK Power Grid on Verge of Collapse Due to Windless Weather, Fire Incident, Spiking Gas Prices
18:09 GMTUS Will Stand With Australia Against Pressure From China: Blinken
18:00 GMTAntony Blinken Meets Australian FM Payne Following AUKUS Defence Alliance Announcement
17:54 GMTDutch Foreign Minister Steps Down Over Handling of Afghanistan Refugee Crisis
17:48 GMT'Who Made Your Choices?': Time Divides Internet Over Its Annual List of Most Influential People
17:41 GMTRussian Scientist Says Ozone Layer Hole Close to Maximum Size But May Recover
17:37 GMTUS Sanctions 5 Individuals in Turkey Over Links to Al-Qaeda
16:49 GMTYoung Chinese Student Recounts Panicked Escape From Dormitory During Earthquake
16:41 GMTUnexpected Reason Why Manchester United Talisman Cristiano Ronaldo Swapped Mansions in England
16:39 GMTPiers Morgan to Headline News UK's Copycat Rival to RT and GB News Next Year
16:30 GMTBread and Circuses! Adorable Quokka Enjoys Juggling Show
16:24 GMTSeveral Rockets Reportedly Hit Kabul, Could Have Struck Power Plant
16:09 GMTTrump Says Americans Won’t ‘Have a Country Left in Three Years’
15:46 GMTIraqi Asylum Seeker Jailed After UK CCTV Operator Spots Him Raping Unconscious Woman on Seafront
15:36 GMTPentagon Contract Seeks Alternate GPS Using Low Earth Orbit Satellites
15:27 GMTRuckus Over AUKUS
15:26 GMTUS Regulator Approves Creation of Nuclear Dump in Texas Despite Opposition From Local Authorities