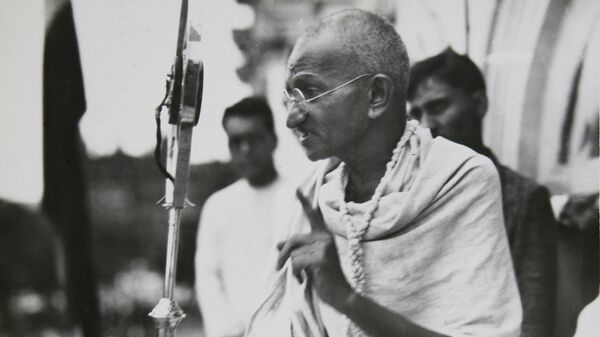 New Delhi (Sputnik): Some days ago, a pair of glasses believed to have belonged to Mahatma Gandhi were found hanging out of a letter box for Andy Stowe, a British auctioneer. Gandhi’s glasses have now been bought by an American collector, who bid for the historic item for six minutes before winning the auction.

The UK's East Bristol Auctions – a place to buy and sell antique collectables reportedly began the bidding of Mahatma Gandhi’s glasses starting at around $18,684 but the article ended up fetching around 18 times its starting price and was finally sold for $340,330.

The official Instagram page of the East Bristol Auctions posted a snippet of the moment the price of the glasses was finalised along with a caption saying, “an incredible result for an incredible item”. Take a look.

See the moment Gandhi's Glasses sell for £260,000 - we found them just 4 weeks ago in our letterbox, left there by a gentleman whose uncle had been given them by Gandhi himself. An incredible result for an incredible item! Thanks to all those who bid.

A gentleman, whose grandfather was once presented with the souvenir by Gandhi himself, left it in the auction office's letterbox around four weeks ago. Along was a letter that said, “These belonged to Gandhi, and my uncle was given them when he was working in South Africa”.

Just some days ago, auctioneer Stowe himself admitted to the media that the person who left these glasses told him, "If they're no good, just throw them away”. Now, after the auction, the elderly former owner of the glasses belonging to UK’s Mangotsfield will be splitting his share of the money with his daughter.

Stowe has reportedly called this sale a “new record” for the East Bristol Auctions and has described it as "the star lot of the century". The auctioneer told reporters that upon hearing about the auction, he “nearly had a heart attack”.

The news has been spreading on India’s social networking platforms. Indians have also mocked the British for still minting money from India referring to the prized possessions that were taken from India during the colonial era. The list also includes the world famous Kohinoor Diamond that was placed from one British Crown to another for years before it was put on public display in the Jewel House at the Tower of London.

​Mahatma Gandhi is one of India's most iconic leaders who ushered in the freedom movement against the 200-year British Raj in the early 1900s. He advocated "Satyagraha" or passive political resistance, as the weapon to take on the mighty British Empire. Six months after India gained its freedom, Gandhi was shot dead by a religious fanatic during a prayer meeting in New Delhi.

Gandhi's pictures are printed on India's currency the rupee as a mark of gratitude from free, independent India.